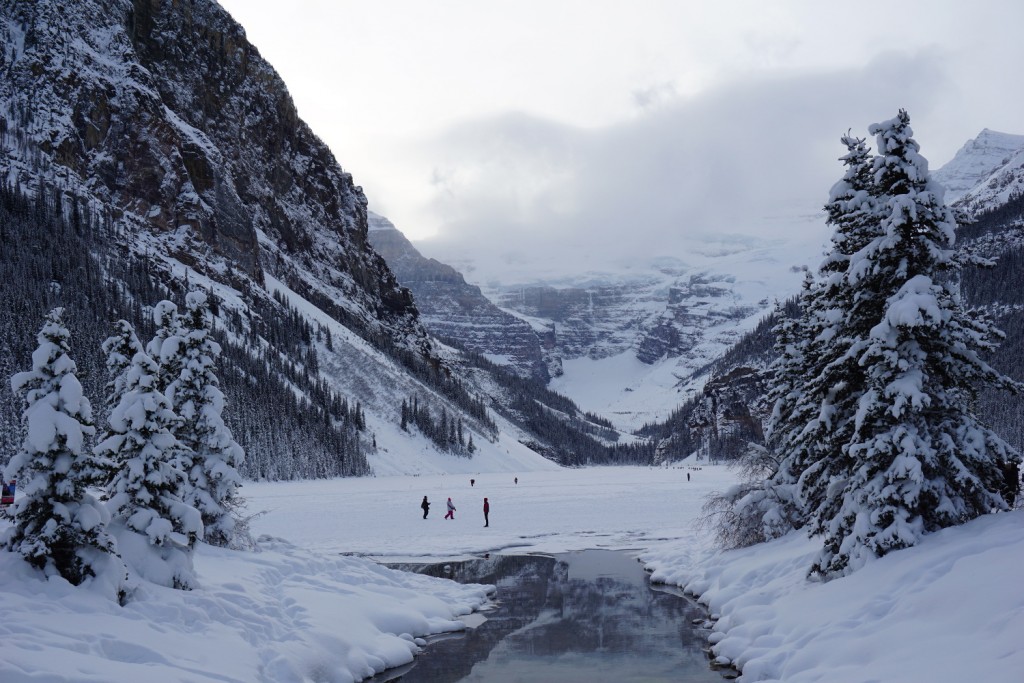 Growing up me and dad would do a ski trip every couple of years or so. Well our tradition took a hiatus for 6 years but we decided to head to Banff to ski and snowboard Lake Louise Ski Resort and Sunshine Village for our father son trip. In the past we went to the Salt Lake area doing a different ski resort each day and on another trip we went out east to Killington and got a taste of east coast skiing and snowboarding. Banff was by far the most scenic place I have ever snowboarded at and both the ski resorts had some great terrain!

The flights were actually booked many months ago to Calgary. Part of the reason for our decision to go to Banff for skiing was we had nearly perfect flights and were able to book the flights for 25,000 Delta miles round trip each (hey no money for the tickets!). That is cheap in miles too. The flights typically range in the $500 range so this was a great value and the best part was we met up in Minneapolis for our final connecting flight into Calgary and back home. 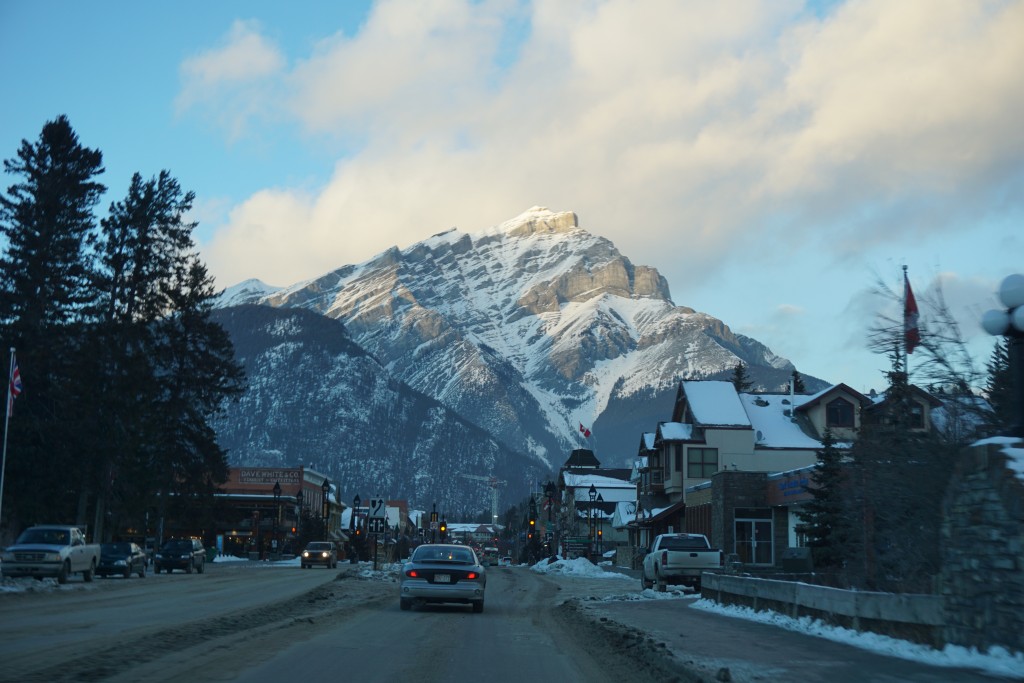 On to the actual trip! The scenery was breathtaking (see more pictures below) but what was most surprising to me was the amount of foreigners at Banff and I don’t just mean Canadians. There were tons of Brits, Aussies, some Russians, and plenty of people from Asia. Banff is truly a global destination. I guess I had never thought about Banff being such a global destination before going but I can totally understand now. Banff is truly one of the most beautiful places in the world. The way the mountains and valleys come together is awe inspiring. The main valley where Banff and Lake Louise is extremely wide allowing for glorious views of the mountains that magically jut out. Most of my snowboarding and mountain experience had been in the US Rockies and I have to say that Banff National Park is on a totally new level at least in terms of scenery.

Back to the foreigners in Banff. In the time we were there we only met only one other American family. Crazy to me at least…. A lot of the workers at the resorts and restaurants were actually from Australia. Apparently Australia and Canada have a great relationship where Canadians dream of enjoying the tropical beaches in Australia so they visit right after finishing school. On the other hand Aussies come up to Canada to take advantage of the cold to ski and snowboard. Pretty cool to me!

Another great part of the trip was how much further the US dollar went in Canada. Right now 1 USD equals 1.4 CAD, in the past this usually has been at 1:1 ratio (I grew up just an hour away from Ontario). That is a huge savings and I was surprised to not see more Americans taking advantage of the strong US dollar. The dollar kept on dropping the closer and closer we got to the date and I scored a crazy deal on the hotel after rebooking it multiple times (it was a refundable rate on Orbitz). We ended up paying just $40 USD per night… Thanks in part to the dollar gaining value and some nice promotion on Orbitz. The place we stayed at, Banff High Country Inn was also great. Nothing too special but perfect for a ski weekend. Two hot tubs and within walking distance to nearly everything in Banff.

As for the skiing and snowboarding both the mountains provided many great options. The only downside was they were both lacking in new snow. It wasn’t bad by any means but it was below the typical Canadian snow standards. Heck, having grown up in Michigan and snowboarding there the conditions seemed good to me! We spent one full day on Sunshine Village and two full days at Lake Louise Ski Resort. One good thing about the weather was that it was unseasonably warm for there at least… Temperatures were about 20 degrees Fahrenheit throughout the day which is warm for there! It was cloudy most of the time but on the last day of skiing the sun peaked through and it got up to nearly 30! Another plus was there were almost no lift lines ever… That is not common at US ski resorts and a very welcome surprise. We got a lot of runs in really quickly because of that. 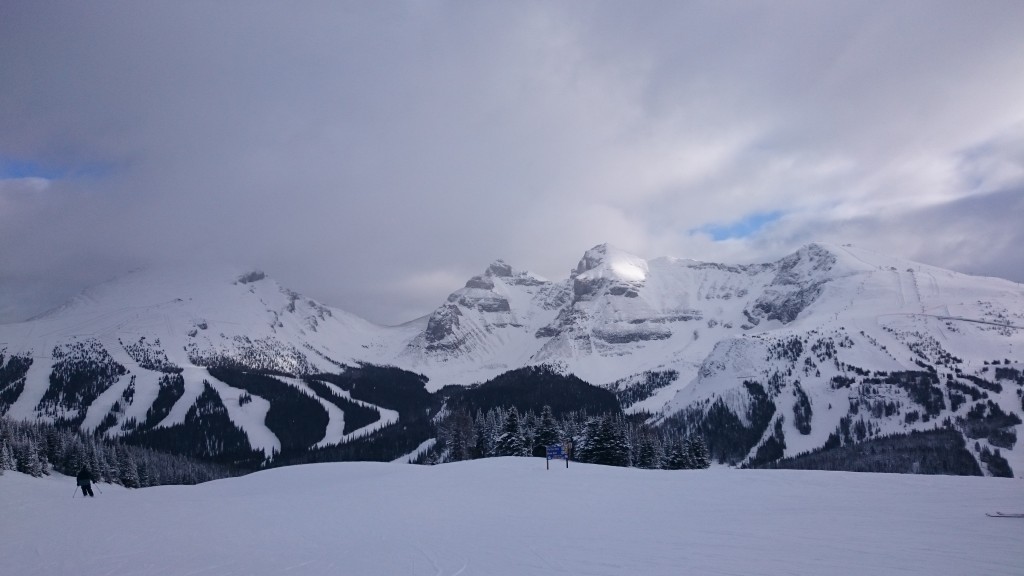 The setup at Sunshine Village was quite a bit different from what I was used to. There was no front face when you pulled up into the parking lot. Just a lodge and a gondola that snaked around to where all the runs were. From there there are multiple peaks that can be reached with many runs coming back down. What was nice at Sunshine was that a majority of the runs ran down into one area where they had there upper lodges at. Made it pretty easy to take different runs down and meet up with other people. My personal favorite run was on the other part of the mountain off of Goat’s Eye. Take Sunshine Coast all the way down, it is a cruisers dream. Just beware there are a couple of flat spots in the middle and near the bottom of the lift. If conditions were better it would have been awesome to tryout some of the black diamonds near that run. Unfortunately they had closed many of the steeper runs off of Goat’s Eye mountain because of lack of snow. One thing pretty unique to Sunshine was that they had just installed the first heated ski lift chair in Canada. Basically the seats were heated and you pulled down an orange shield over the chair. It really did keep you a lot warmer! Overall, good resort, friendly staff, kind of a weird layout, but on a powder day this place would be amazing! 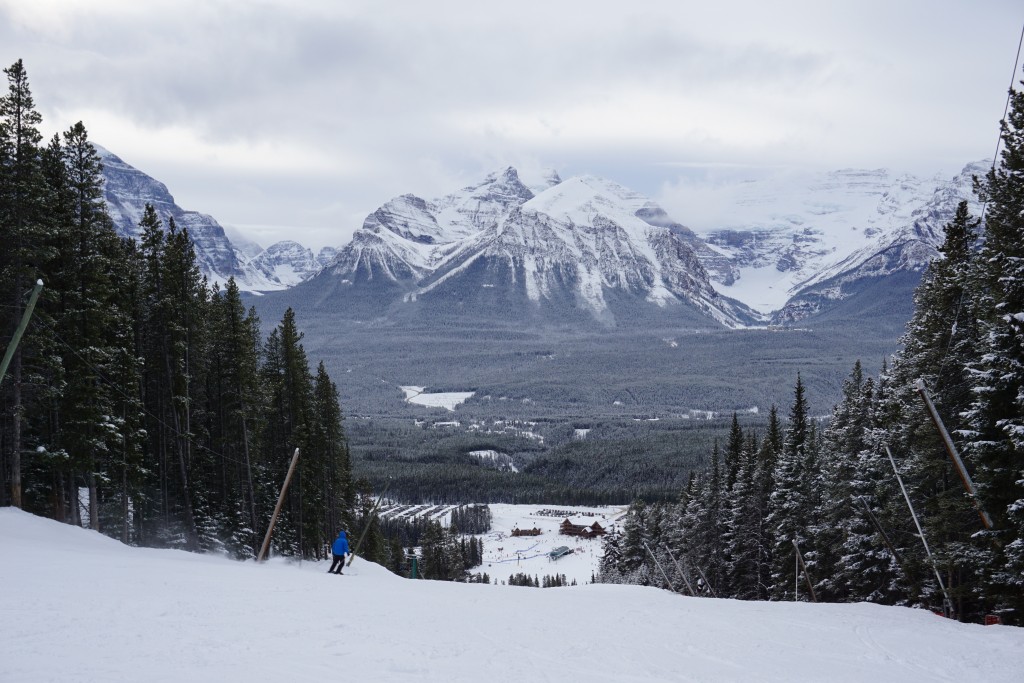 My dad and I decided that we would at least do one day at Sunshine and one day at Lake Louise with the third day of skiing and boarding being open. We had even debated trying Mt. Norquay but Lake Louise wowed us with it’s scenery and terrain so we spent two days there. Lake Louise is much better suited for snowboarders compared to Sunshine as it is pretty much all vertical and has very little flat spots. One the front side taking the Glacier Express and then the Top of The World Express was one of my favorite spots. Decently steep black diamonds that connect up to some blue cruisers. Also there are a couple of good powder stashes in the trees as you go towards the Summit Platter. Best part of the front side is doing 3000+ vertical feet with no stops and almost no flats. Simply amazing. Word of caution I would avoid the blues and greens off of the Grizzly Express as it becomes a bowling alley of beginners.

Now the Larch area was also another favorite spot. Great black diamonds and blue cruisers off both the Ptarmigan and Larch Express lifts. My dad’s favorite run by far was Ptarmigan which had a nice pitch and for some reason wasn’t skied too much. Just like Sunshine, the base amount of snow just wasn’t enough. So a lot of the back bowls were closed or in pretty terrible condition. I really wish they had more fresh powder because wow did it look perfect when I took one of the greens back there. 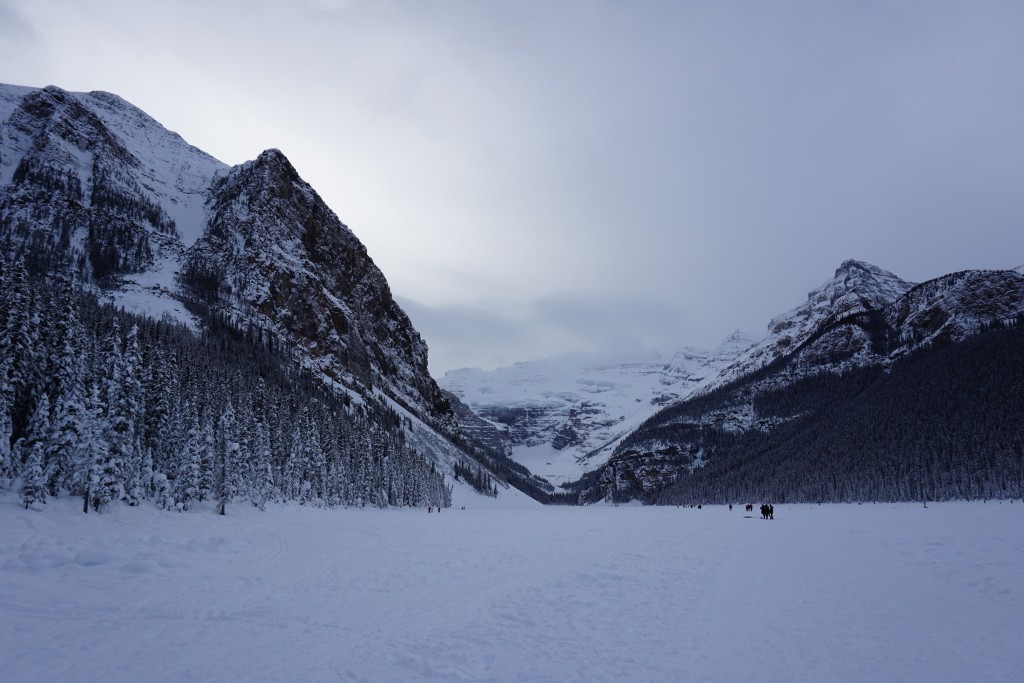 After each day of skiing and snowboarding we stopped at the insanely beautiful Lake Louise. It’s only a short 10 minute drive from the ski resort so there really is no excuse not to stop. The extremely fancy Fairmont Lake Louise is located there but there is also free public parking lot so it is easy to can walk the grounds and on top of the lake! The first day there it was snowing so our view was kind of obstructed but it was still really pretty. They also had the Ice Magic Festival going on and we saw some ice carvers doing their craft. My favorite one was the canoe! As you can tell from my pictures the next day the snow stopped and the clouds broke just enough to get some amazing views of Lake Louise. 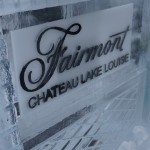 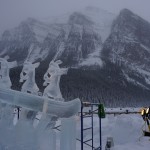 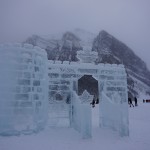 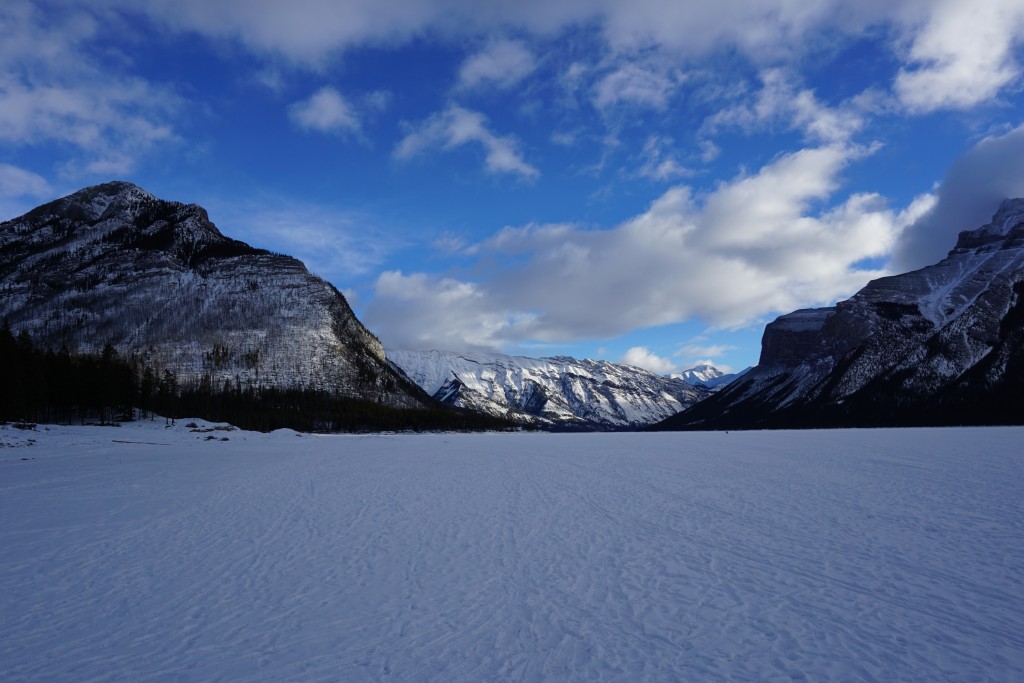 Prior to heading to the airport on our final day we had a couple of hours to explore, so we drove around Banff National Park. If I haven’t mentioned already everything in this post is within the national park and because of that you have to pay a park fee for each day. Well worth it as they truly do try to preserve the area, even the building codes for the ski resorts are really strict. We drove up to Mt. Norquay just to checkout the ski resort and found a nice overlook of the town of Banff. Also just a couple of minutes away from Banff is the largest lake in the park, Lake Minnewanka. Also really beautiful and there was almost no one there!

Wow, Lake Louise and Banff National Park are truly one of the most beautiful places I have ever been too. The scenic views are reason enough for me to come back there no matter what the season is. What was a really pleasant surprise was how friendly everyone was and the global atmosphere. Banff is a global destination bringing together many different people. This had been on my travel goals list for quite a while and it didn’t disappoint. As for the skiing and snowboarding, both Sunshine Village and Lake Louise Ski Resort are top notch. Lake Louise is also definitely in my top 5 of ski resorts in terms of terrain. Now I have to come back in the summer time! Maybe add on Jasper and Canada’s Glacier National Park too!

All pictures are my own unless otherwise noted 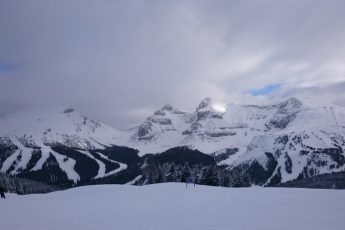 « Previous post
Flying To Australia & New Zealand On the Cheap via Award Flights, Plus Business Class
Next post »
Here Are My Travel Goals, What Are Yours?