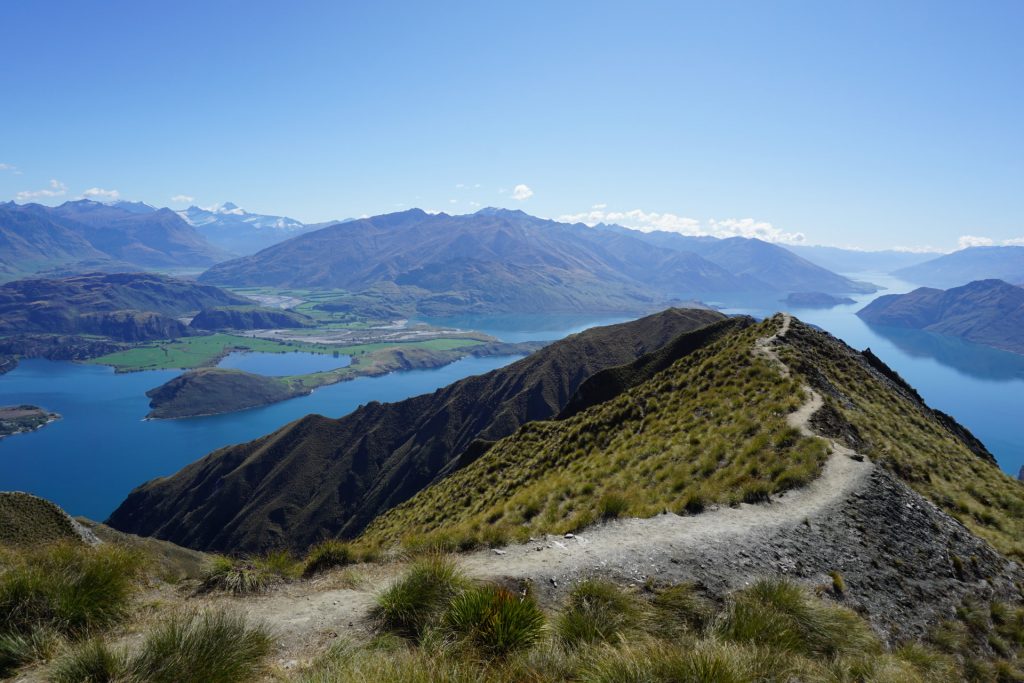 Queenstown & Milford Sound, Most Beautiful Places in the World? YES! 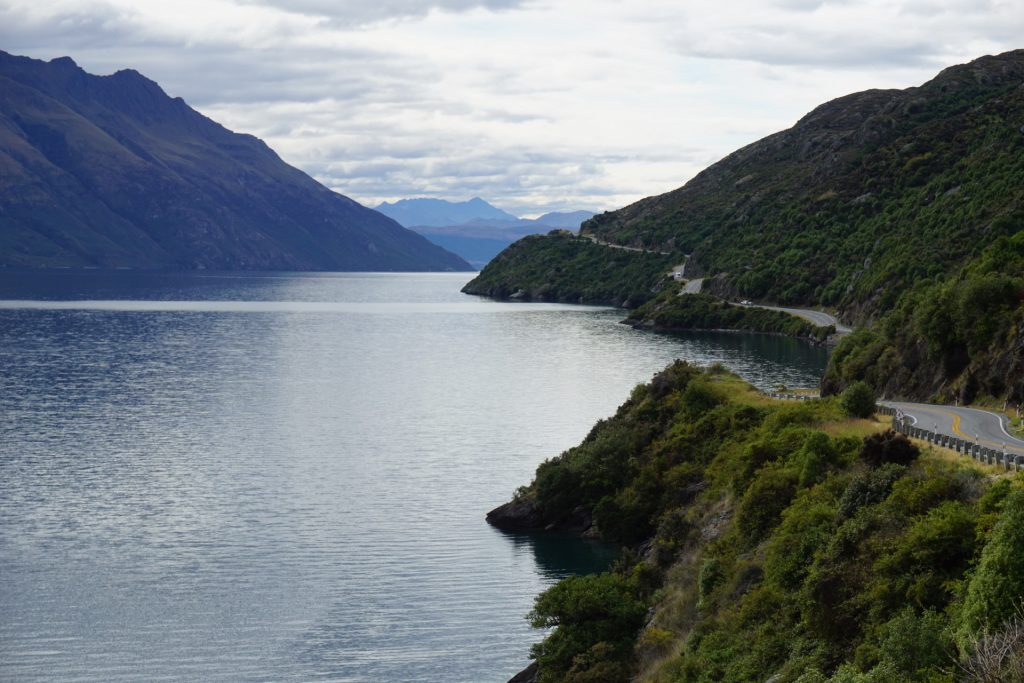 Wow just wow! That was our first impressions of Queenstown as we walked off the plane and onto the tarmac. Literally everywhere we turned there were incredible mountains and crystal clear lakes. We had just spent an amazing week in Melbourne and touring the Great Ocean Road, both amazing experiences. With that being said we were caught off guard with how pretty New Zealand is.

To get to Queenstown we were able to tack on a free stopover on our award ticket to Australia. For more info on how I was able to get all the flights for free check here. In summary I got two people to both Australia and New Zealand with half of it in business class for free. Only had to pay the taxes! Hotel wise we stayed at DoubleTree Queenstown the bulk of the time and thoroughly enjoyed it. 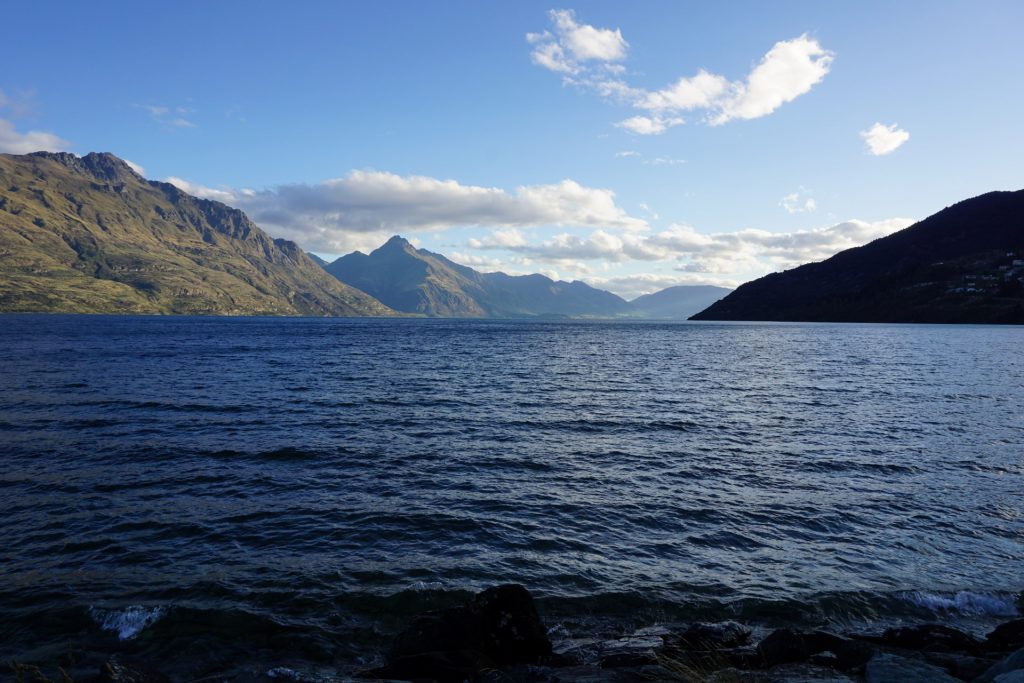 After landing in the afternoon from Melbourne we checked into the DoubleTree Queenstown. Thanks to my miles and points hobby we got the room for free, full review of the hotel here. After getting setup, we wandered down to the nearby path that follows the lake and really took in the sights before catching the water taxi to downtown Queenstown. The water taxi was a perfect way to be fully encapsulated by the mountains and take in the fresh air. 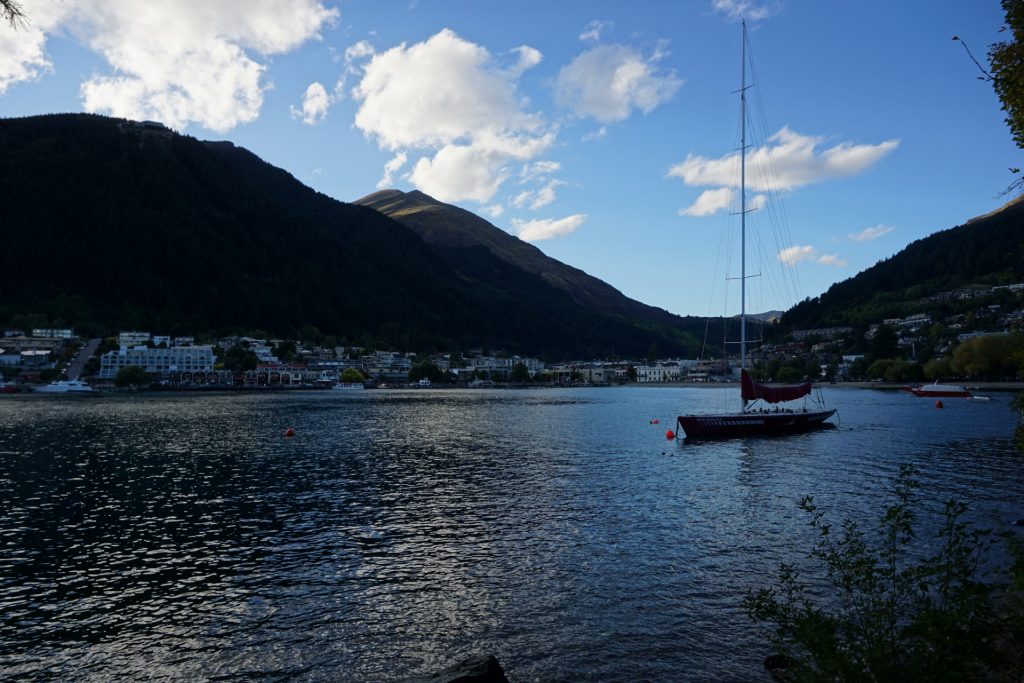 In Queenstown we took a stroll through the park on the peninsula as the sun was setting. Picture perfect looking back into the bay. Dinner wise we chose a “Mexican” place which was just okay and as it got dark we got really cold! Without the sun it was quite a bit colder than we were prepared for so we decided to head back to the hotel via the water taxi for an early night. What surprised me about Queenstown was how global it was. I knew it was a very touristy town but I thought there must be some locals. Nope, pretty much everyone living, working, or vacationing was from some other country. Pretty cool and reminded me of Banff but with even more cultures.

Our big hiking day was on the second day as we decided to hike up the intimidating Roys Peak! We grabbed the free hotel breakfast thanks to my Hilton Honors Diamond status and tried to stuff our faces for the strenuous day of hiking. Roys Peak was about an hour drive going over a mountain. Tons of switchbacks going up which was somewhat stressful in our straight from Japan rental car. No English on the airbag warning signs and even had a Japanese bumper sticker for some reason. It definitely wasn’t pretty or a very good car but it proved reliable for the trip. Also pretty freaking cheap I might add, less than $100 USD for the entire rental. 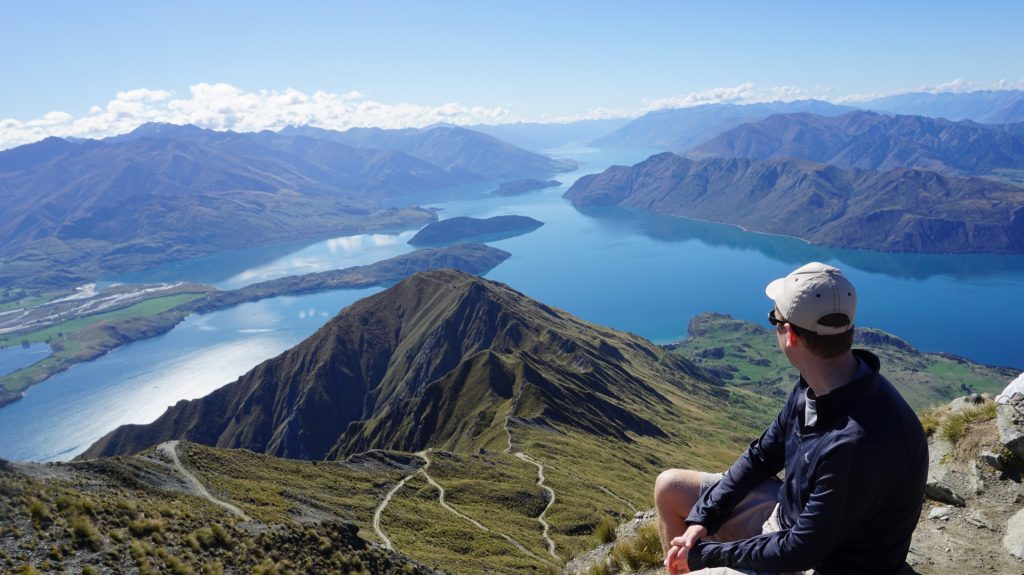 I don’t want to spoil our entire hiking adventure (a separate post on that later) but Roys Peak was one of my favorite hikes ever! We had great views of the mountains and Lake Wanaka the entire hike up along with hundreds of sheep. It took us about 6 hours total for the 10 mile and 4000+ vertical foot hike. It was exhausting with the vertical and the sun beating down all day but totally worth the sweat. 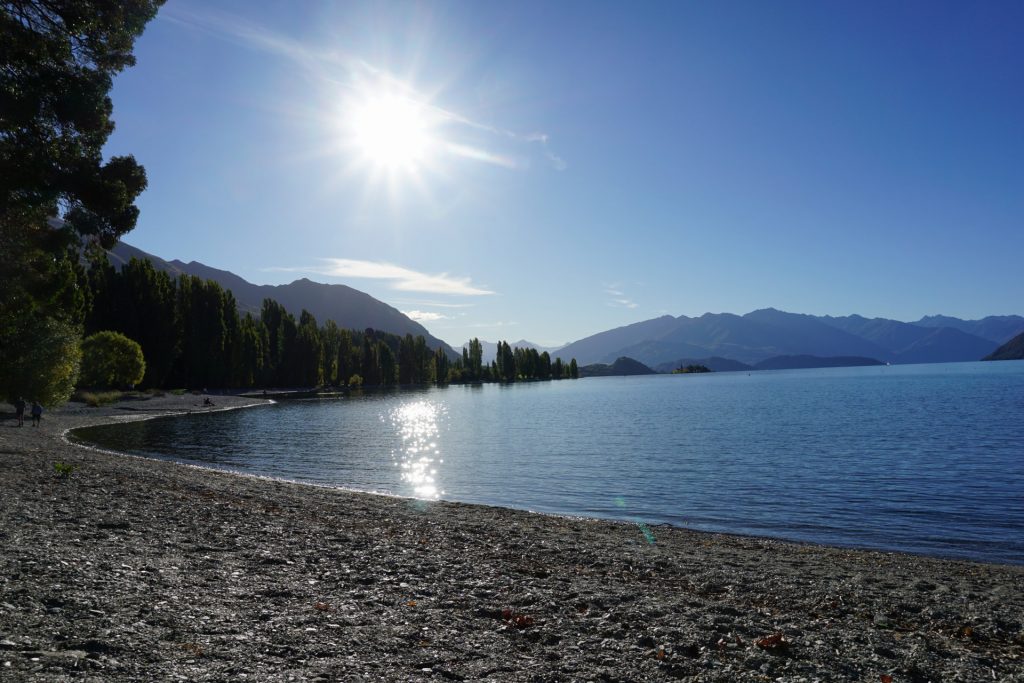 Coming back down the mountain we stopped at a pullout to enjoy a rocky beach along Lake Wanaka which also had amazing views and didn’t require scaling a mountain. After the hike, we were starving and tried to find a place to eat diner. Little did we know that dinner didn’t start until 5:30 PM at all the restaurants! It was only 4:00 PM so we settled on some snacks, a sausage roll for me which was one of things I liked about the Australian and New Zealand diet. Beth of course chose a healthier option and off we drove to Queenstown where we had dinner at the hotel since we were totally wiped out.

Here is another great account of hiking Roys Peak. 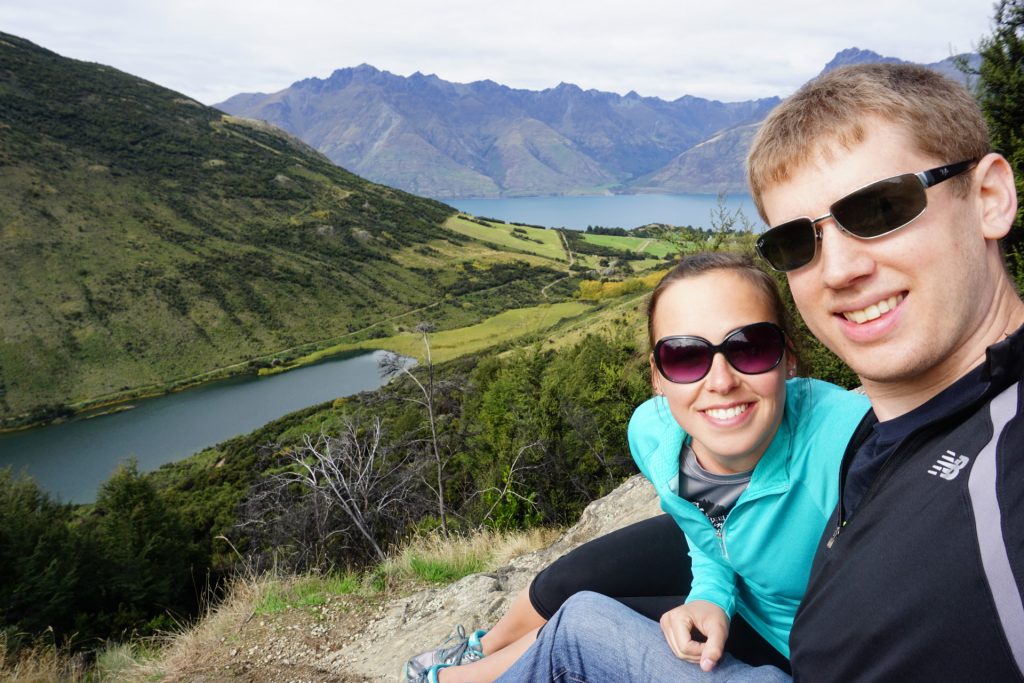 Well our legs were still attached when we woke up so it was off to another hike! We decided a hike with less elevation was needed and found the perfect spot just on the other side of Queenstown. Mt. Crichton was our pick. It is an easy to moderate 3 mile loop hike that passes through old mining country. A beautiful waterfall and remnants of an old mining shack were along the path. But the highlight was near the end with a lookout on to the small Lake Dispute and the enormous Lake Wakatipu. It was a lot easier on our legs and we headed into Queenstown for a very late lunch. 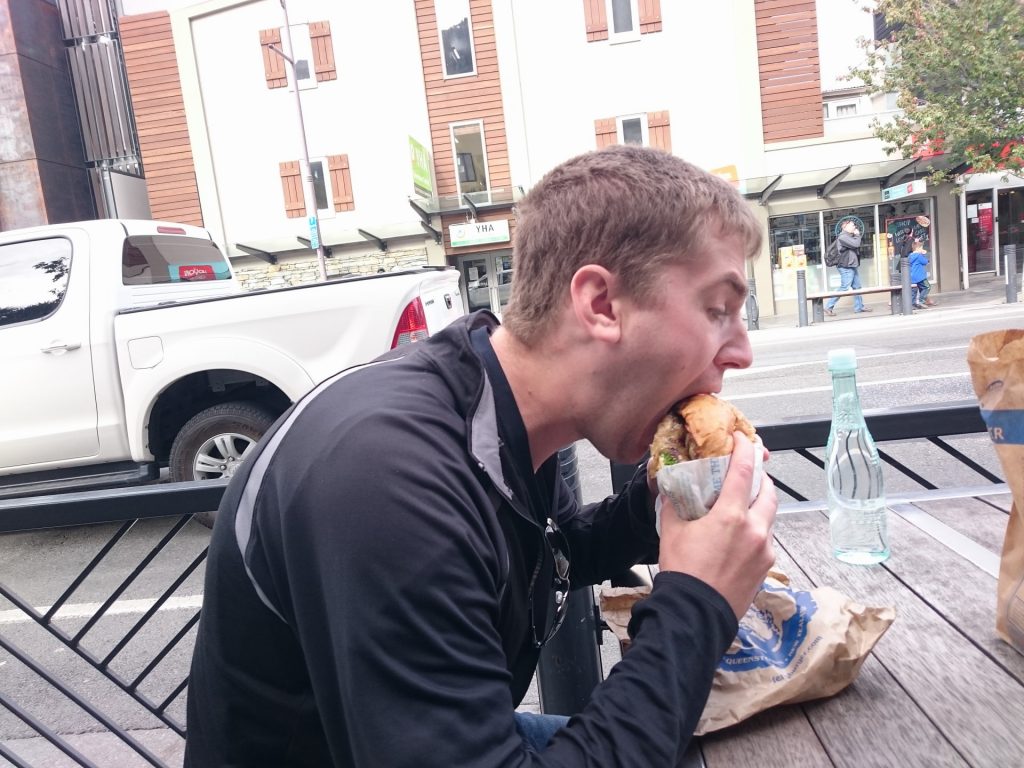 No trip to Queenstown would be complete without a stop at the world famous Fergburger. Even at the odd hour of 2:00 PM, the line was out the door and around the corner. Since I was starving, I went for the double with fries and manged to scarf it all down.

Of course we had a lot of activities planned so we packed an overnight bag and started driving towards Te Anau which is the last real town before Milford Sound. We arrived just in time for dusk and had dinner at the Ranch Bar & Grill. This was one of our favorite meals where Beth had some delicious pumpkin soup. A little souvenir shopping was needed in this sleepy little town as we headed back to stay at the Kingsgate Hotel. The hotel was nothing special but worked for a one night stopover on the way to Milford Sound and was right on Lake Te Anau.

Shout out to Earthrekkers with a great guide on Te Anau and Milford Sound day trip. 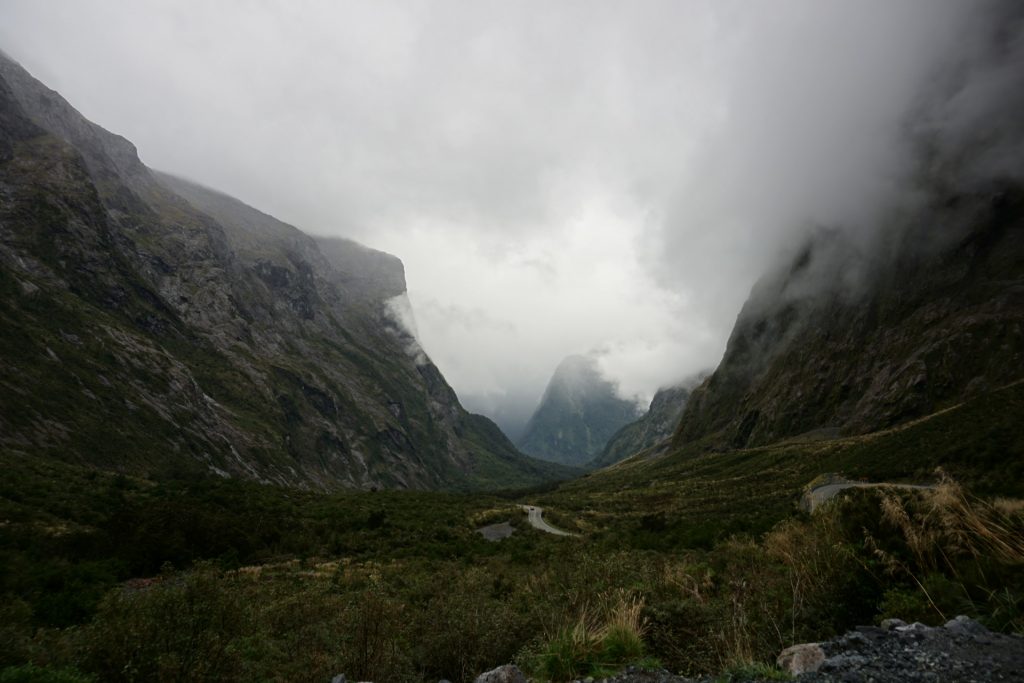 On to our journey to the Milford Sound! Driving through the mountains wasn’t too nerve racking until we reached the tunnel. It is a very crude one lane tunnel that cuts through a mountain and is the only way to drive there. The tunnel actually has a pretty decent pitch going downhill on the way to Milford Sound. On the other side we took a stop at a nearby waterfall to stretch our legs as we had time to burn until our cruise booking. 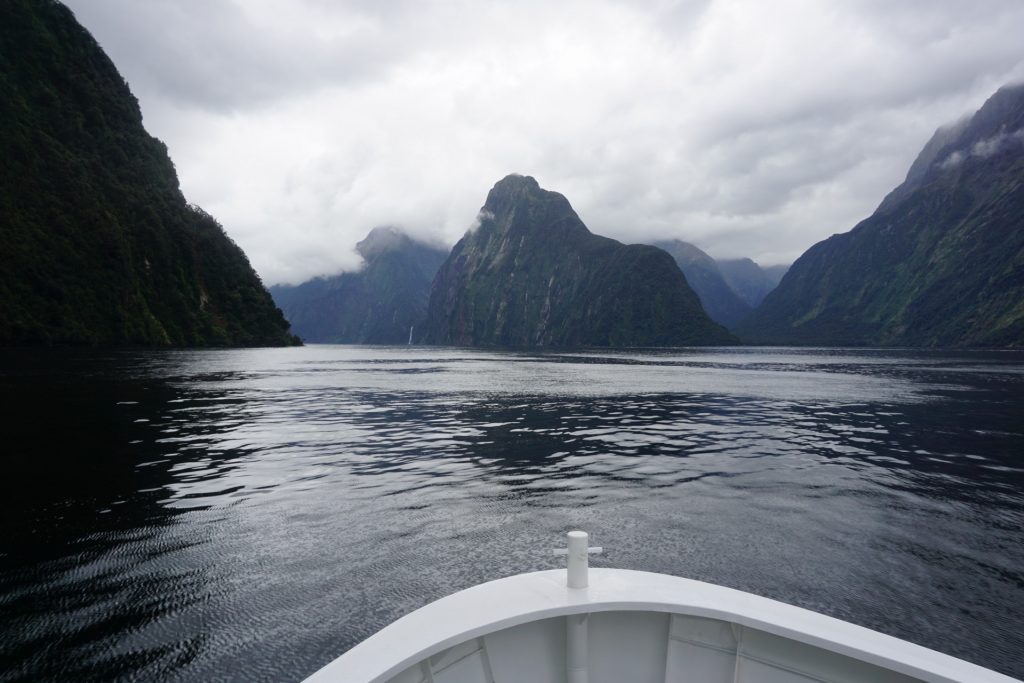 We already booked a ferry tour set for 10:45 AM from Cruise Milford Sound. I highly recommend them as they were extremely professional and had a much smaller boat than the other options. This meant a much more intimate time as we talked with the crew and many people on the boat. We met a really nice retired couple who had been driving there camper van around New Zealand for the past couple weeks. They had great stories! Also getting a booking before 12:00 PM helps as most of the tour buses come in after then. Never had a problem with people ruining our pictures! 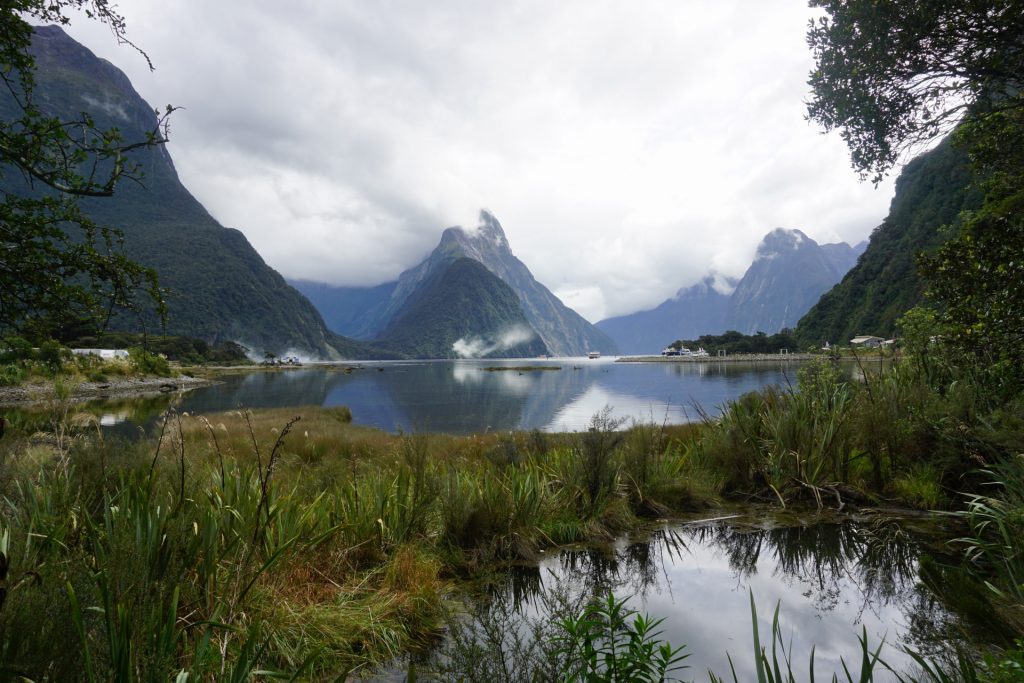 Of course it was pretty cloudy, but that was too be expected. Despite that, the views were still awe inspiring! We didn’t realize that there were so many waterfalls along the fjord walls. A couple of seals were sunbathing on some rocks and the clouds did break a little bit. What was really unique however, was that the filming of Avatar 2 just started right there at Milford Sound! A spacecraft was parked right on the edge of the water. 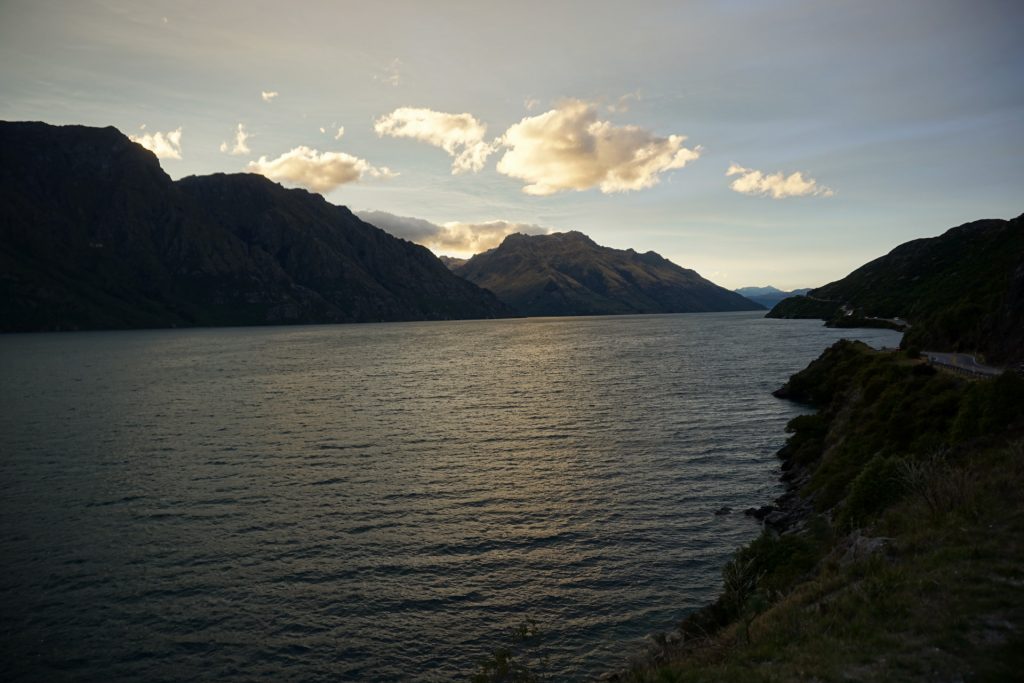 After cruising the fjord we jumped back in the car and did a couple more pullouts on the long drive back to Queenstown. As we approached our hotel we caught an amazing sunset along the very southern edge of the magnificent 50 mile long Lake Wakatipu. It is amazing how the road curves around the mountains and lake. 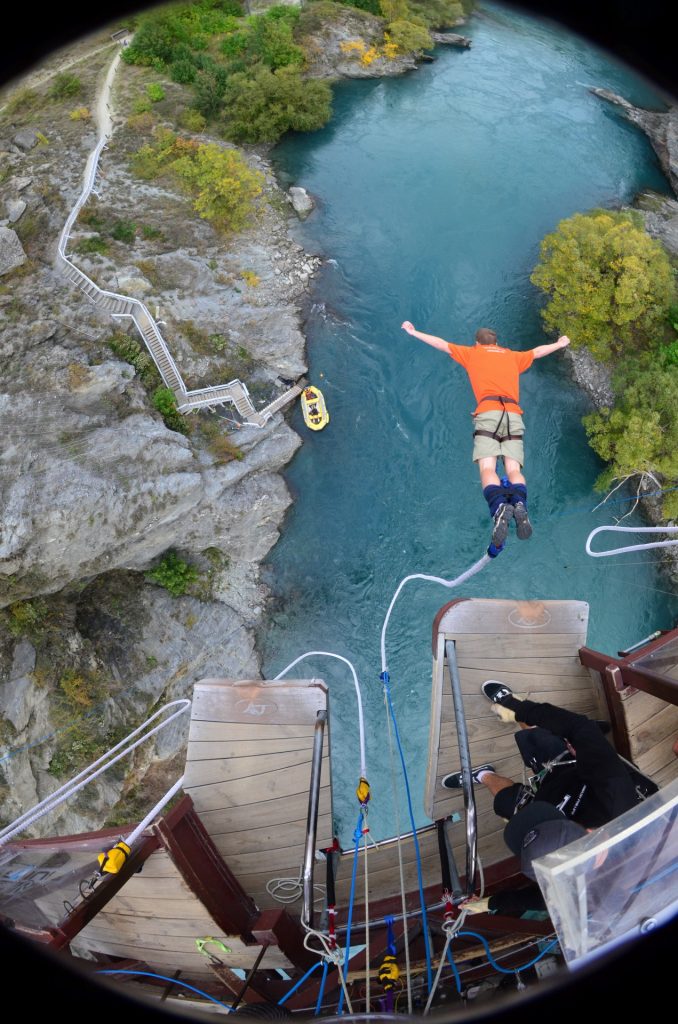 Did I mention we were nonstop our entire trip? The next morning I decided it would be a great idea to jump off a bridge… I couldn’t go to New Zealand without bungy jumping! It was on my proverbial bucket list! No better place than the first commercial jumping outfit at the Kawarau Bridge by AJ Hackett. The bridge drapes perhaps one the most beautiful rivers I have ever seen. The turquoise blue water was amazing and I couldn’t wait to get my fingertips wet bungy jumping! Literally! Honestly, I wasn’t scared until the moment I had my toes hanging over the edge. My body was screaming, “Are you insane!?! You are jumping off a damn bridge!” Photo op was over and off I dove!

The many years of swim team sure helped my form! I experienced a massive head rush as I hurtled towards the cold river with the water going up to my arms. Then back up I went with the rebound of the cord until I eventually hung there suspend. I may even let out a scream, unusual for me! It was a memorable experience and something I hope I can do again, it lived up to the hype. 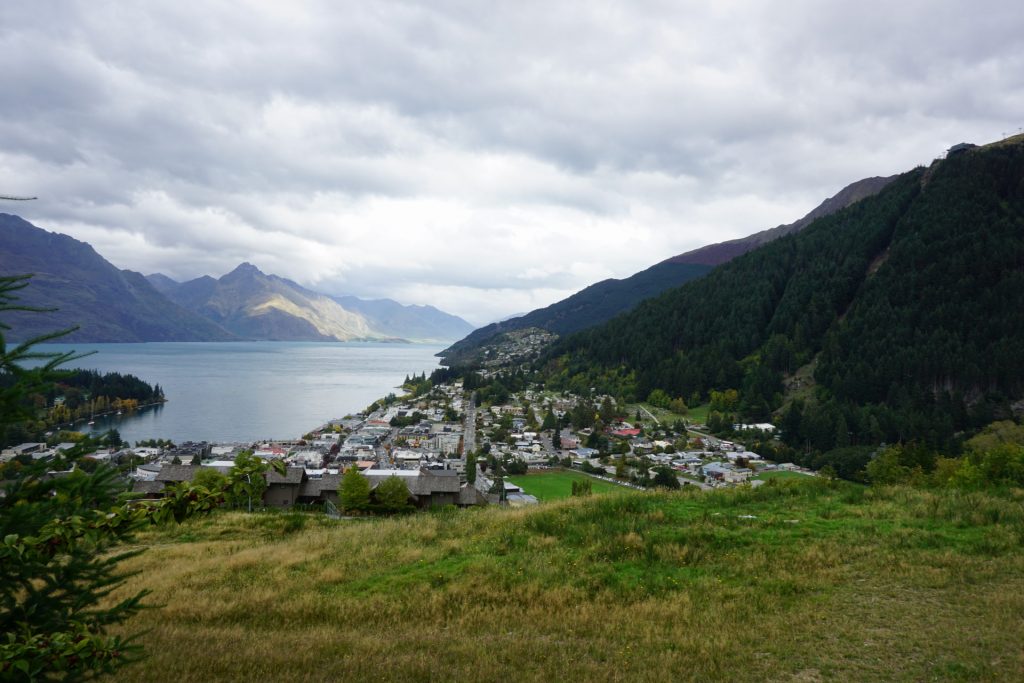 The final hike of trip was up the Queenstown Hill to get a nice view of the town before the rain rolled in. It was about a 2.5 hour hike from the center of town up to the main ridge. Not terribly strenuous but there is a decent pitch especially in the first section. While we didn’t hike the famous Ben Lomond, I think the Queenstown Hill hike was a good, shorter substitute. I don’t think anything could compare to Roys Peak on a sunny day anyway.

Back at the hotel it started to rain so we took the lull in the amazing weather we had most of the week and went swimming in the indoor pool at the DoubleTree. There we met a couple whom we chatted with and ended up getting drinks with before our last dinner in New Zealand.  One of the best parts of traveling is having interesting conversations with people from other places. We sat outside with the couple and one of them happened to be a Kiwi who is a professional squash coach who teaches on the east coast of the United States part of the year, pretty interesting. On the other side of the outdoor fire we sat at was an Australian couple with one of them being a pastor. Some interesting talks ensued about American politics, namely Donald Trump, travels, and life.

I had high expectations for New Zealand and they were exceeded! New Zealand is a truly beautiful country and one that I would love to explore more. While in Australia we got a unique view by staying with locals. We missed that aspect in New Zealand. I would love to come back and drive a camper van around the entire country to view all the sights but also to meet more Kiwis. Thank you Queenstown for setting a such a high standard for New Zealand! We will be back someday!

Heading back home we had an interesting flight itinerary back to the United States…. A 5 hour layover in Wellington and an overnight layover in Sydney. We made the most of it! More on that in a future post. 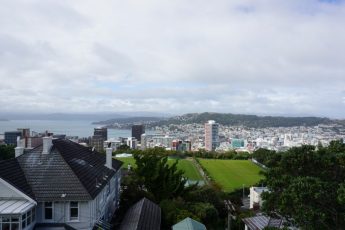 5 Hour Layover in Wellington, How We Made the Most of Our Time! 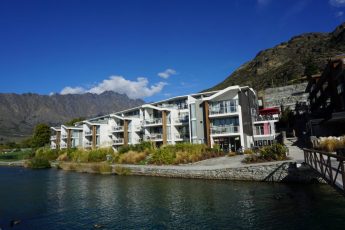