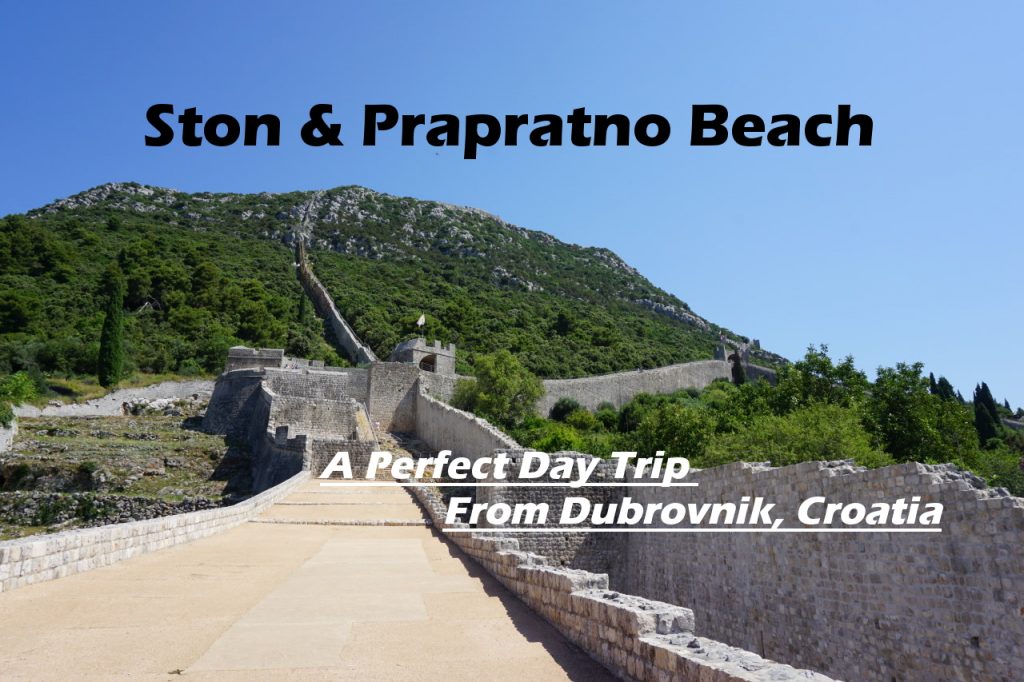 While in Dubrovnik, Croatia, one of our favorite days was our day trip up north to Ston and Prapratno Beach. Ston is home to the largest intact wall in Europe making for a nice piece of trivia, while Prapratno Beach was the most beautiful beach we visited on our entire honeymoon on points. While Dubrovnik is an amazing place to begin with, it is also a perfect spot to base yourself for day trips. From our hotel, the Sheraton Dubrovnik, we first day tripped to the awe-inspiring Kotor, Montenegro, and our second one up to Ston, Croatia. Both were amazing.

Drive Up to Ston, Croatia 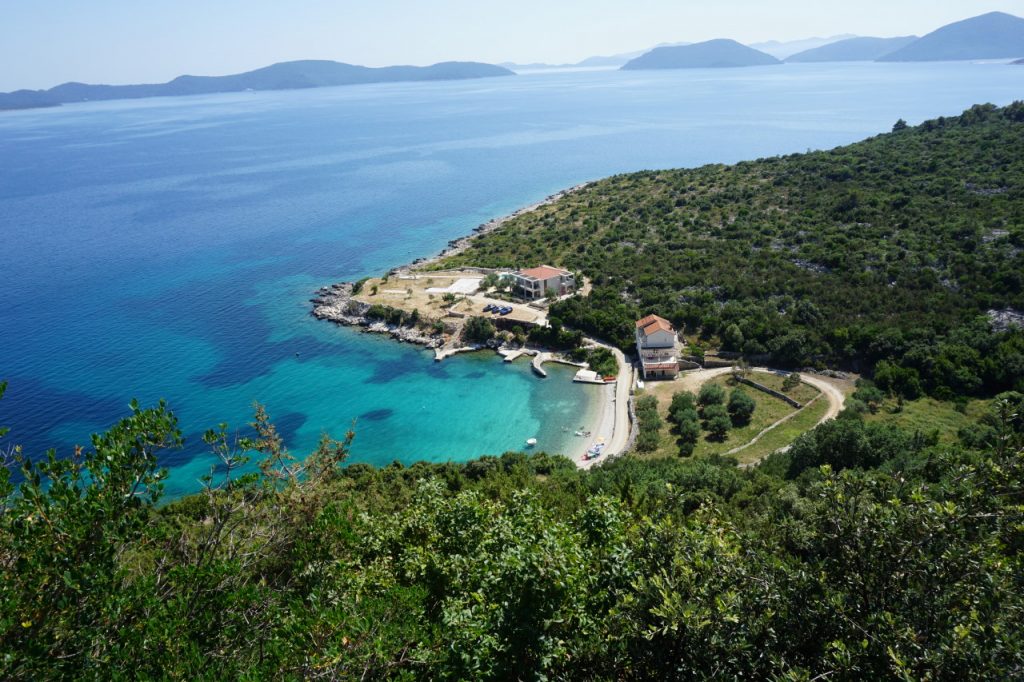 Heading north from the Sheraton we drove through Dubrovnik crossing the modern looking bridge to exit the city proper. From there the drive becomes very scenic as the road hugs the cliffs along the coast. The drive alone was worth it, almost beating our drive on The Great Ocean Road in Australia earlier this year. Looking out you can see tons of the hilly coastal islands and pristine beaches just below the road. 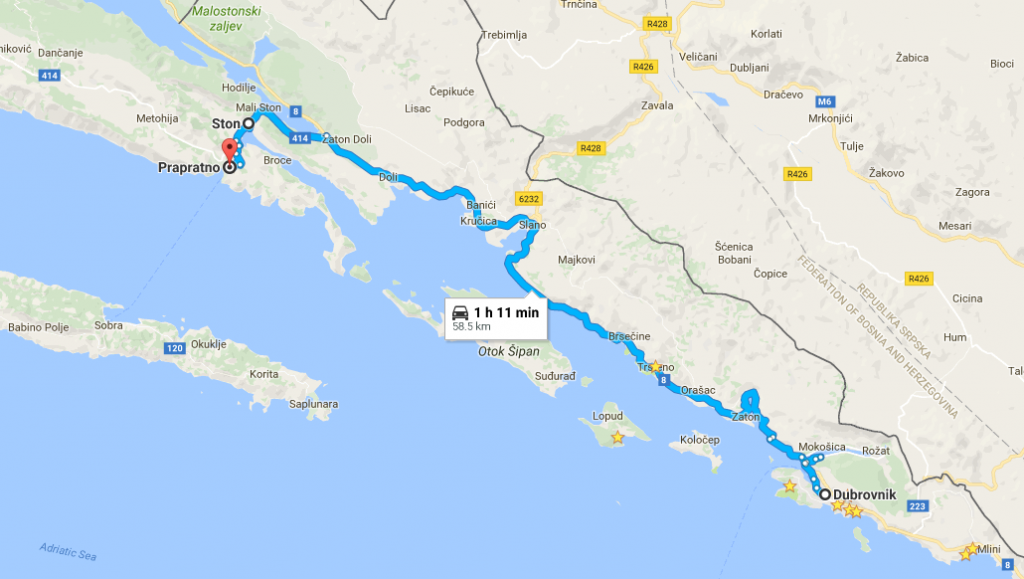 Our rental car had no problem on the road and it was a very easy drive. Simply head north on 8 and before you hit the Bosnia and Herzegovina border take a left on 414 looking for signs for Ston or Mali Ston. It is only an hour drive but just note that it is a two lane road most of the time.

Ston and the Great Wall of Croatia 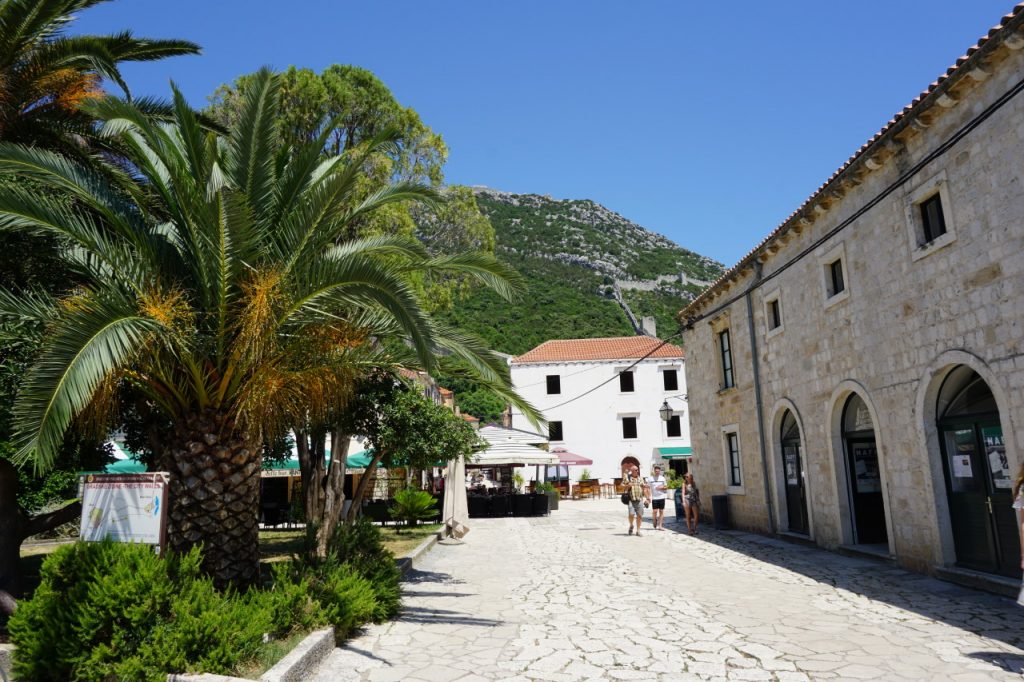 Pulling into Ston was easy enough, it is a very small town. There is a small parking lot on the left as you enter the town. It is a cheap pay lot with a machine so bring change. The signs say you can pay at a nearby store but that is false. They no longer do that but they will exchange bills. We did a quick walk through town before heading to the walls. 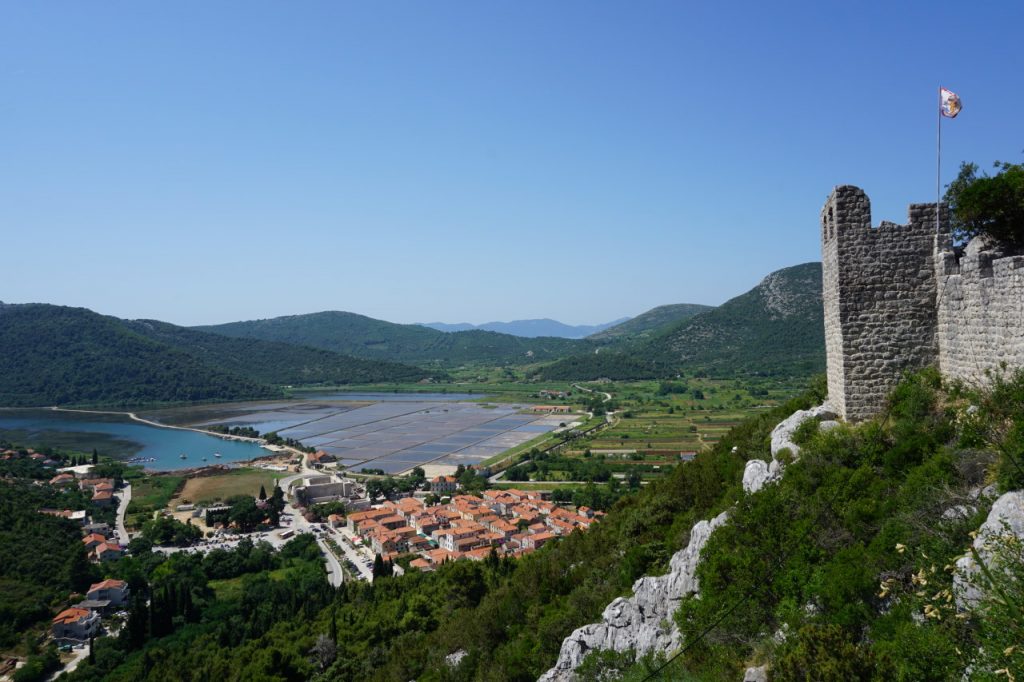 To beat the heat we decided to hike the Walls of Ston (aka the Great Wall of Croatia) first before spending too much time in Ston. Just like in Dubrovnik almost the entire wall is in the sun. The wall at Ston connects to the other town of Mali Ston. It was originally built by historic Dubrovnik, the Republic of Ragusa, in the 15th century to protect themselves from invaders from the north. What remains of the walls still connects both Ston and Mali Ston. These towns also were strategic for their salt pans which was very lucrative. You still see the salt pans near Ston. If you love oysters or mussels both towns are suppose to have some of the best. 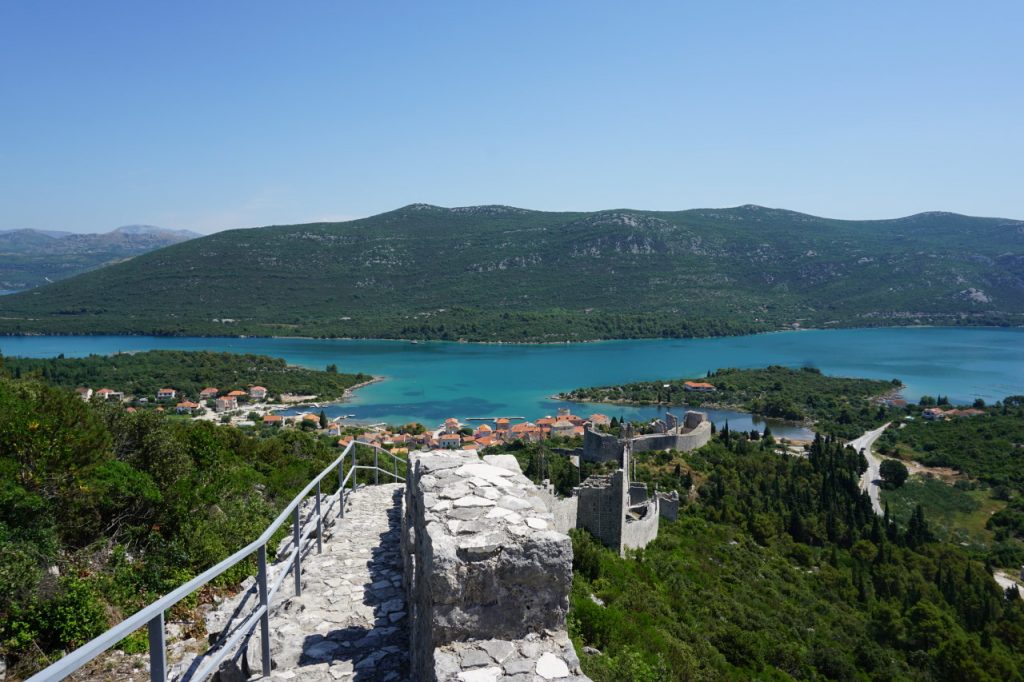 As for hiking the wall it starts with a pretty steep incline as the wall go over a large hill. Once on top of the wall it levels off and then slopes back down into Mali Ston. From Mali Ston you can either hike back the same way or take the easy walking path on the road. In total it took us about an hour to do the full circle from Ston to Mali Ston and back. You could do it in reverse as well but Ston has more going on. 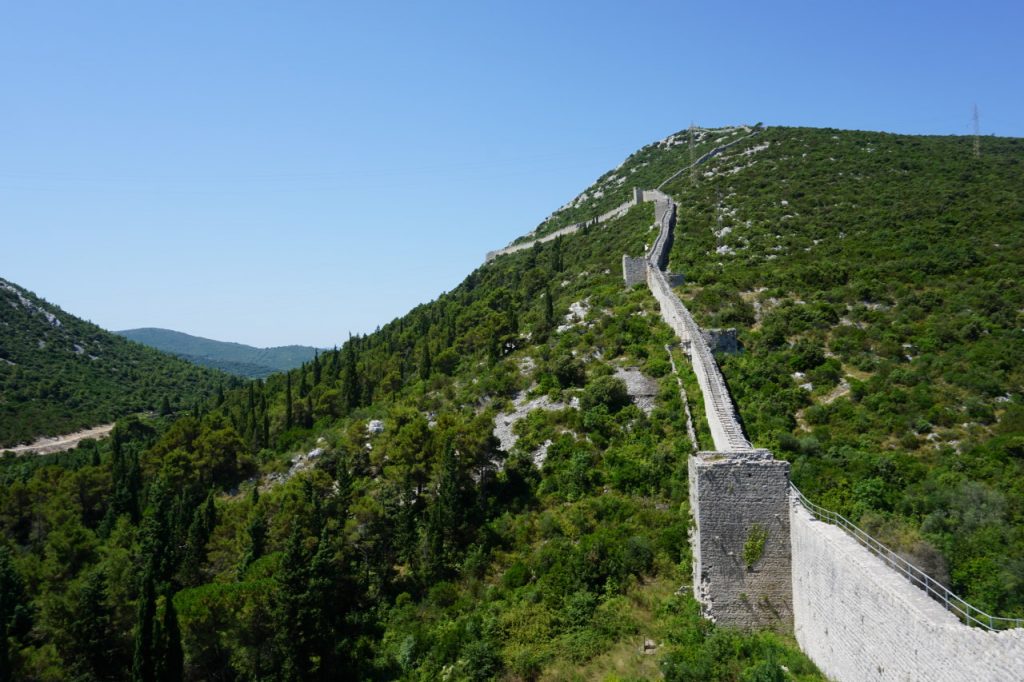 One good thing about the Walls of Ston compared to Dubrovnik’s walls was that we almost had the entire thing to ourselves. So much so that while hiking down into Mali Ston we saw a small family hiking up with one of the younger ladies being topless. For some reason she was embarrassed and covered up when she noticed that we were coming close. I know Europe has different standards of modesty but I don’t understand the thinking of hiking with no top on a tourist attraction then being surprised and embarrassed when you see other people. Strange and interesting times…

Down in Mali Ston we took a couple minutes to wander the small alleys. There is even less going on in Mali Ston than in Ston with mainly just houses. We looped back into Ston taking the easy walking path along the road. Once back in Ston we decided to get some snacks. A tasty burek at the local bakery was delicious. After wandering the small town for a little bit we decided to head off to the nearby beach!

After hiking the walls we were ready for the beach and Prapratno did not disappoint! It is a short 10 minute drive from Ston out on the Peljesac peninsula. Just hop back on 414 heading west and then take a left looking for signs for the ferry. The beach is to the right as you start coming down to the ferry dock. Don’t worry about the ferry as it is pretty far from the beach and there really are not many buildings in this area.

At the beach there is a free parking lot, a campground, a restaurant, and a little beach bar. While we loved the beach near the Sheraton, Prapratno blew it out of the water! Crystal clear turquoise waters, not crowded, and mostly sandy. 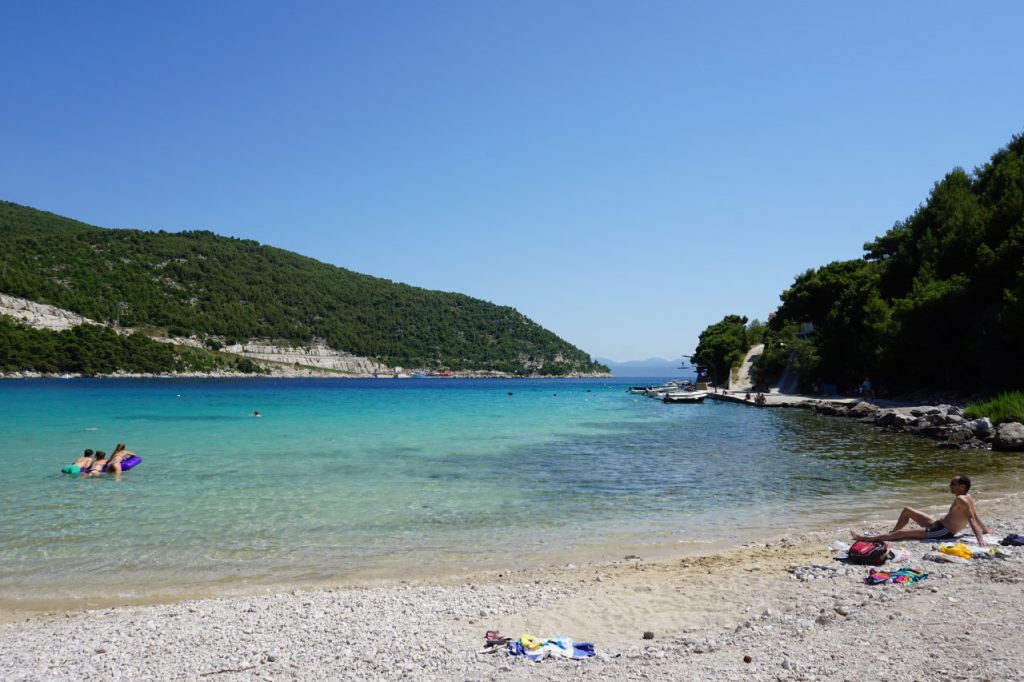 Looking out from the beach you can see Mljet island off in the distance. The ferry shuttles people and car back and forth between the island and mainland. We grabbed a drink from the beach bar and had some hot corn from a local vendor. It was a nice little treat and can’t say that I have ever had corn on the beach. 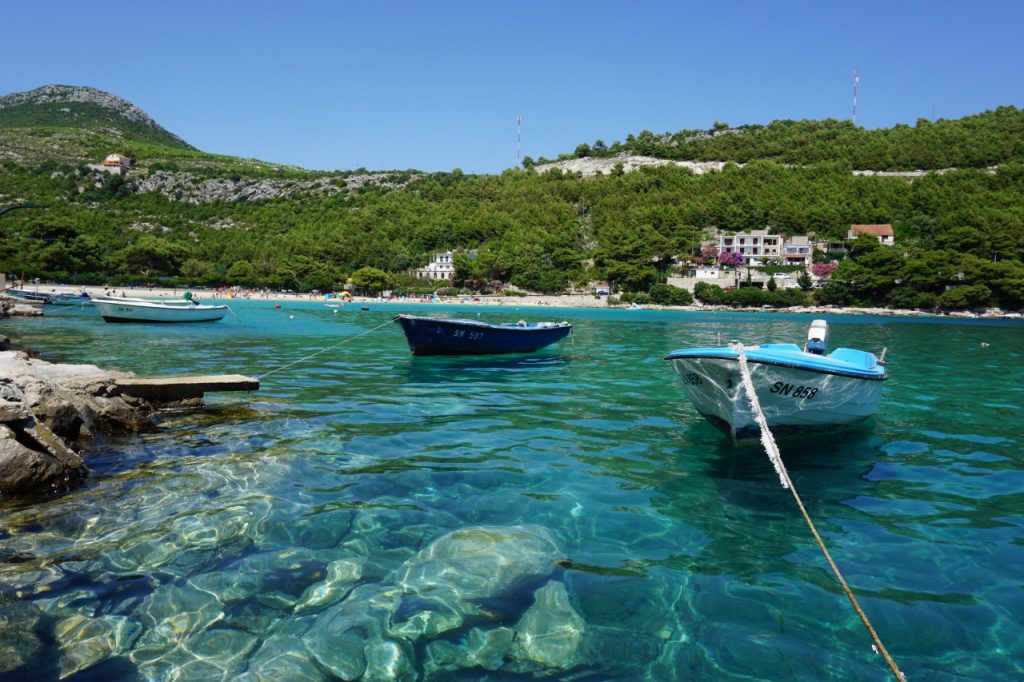 After relaxing on the beautiful beach and swimming in the water we decided to hike around the small little bay. On the far side of the beach you can walk along a worn out concrete path that follows the rocks. Looking back at the beach it was even more beautiful. 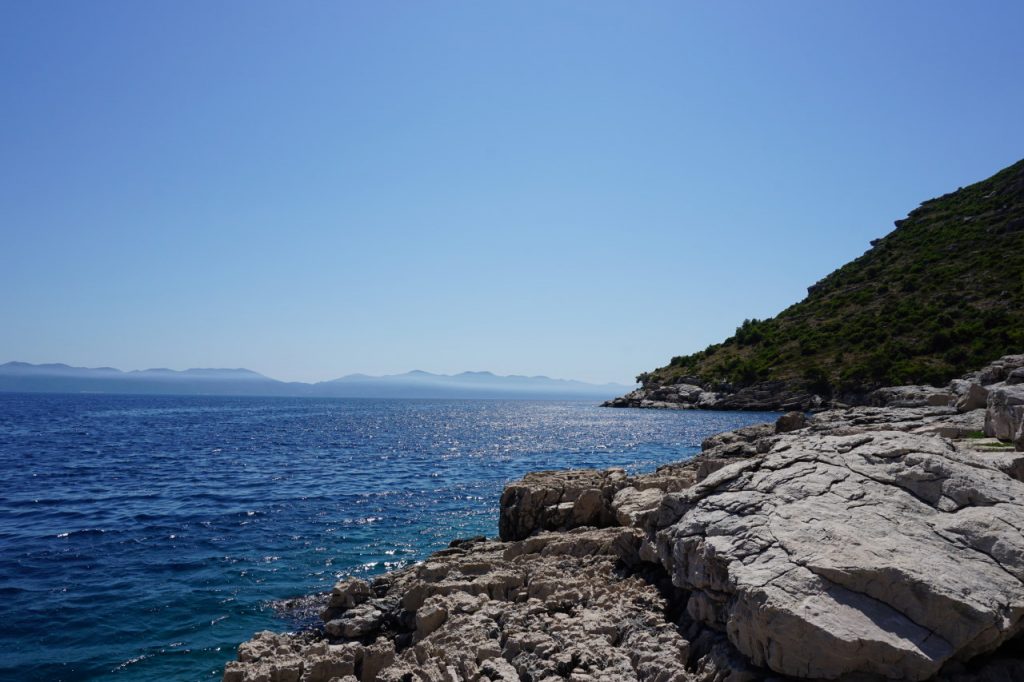 At the very end of the bay it opens up to a rock outcropping area that is a secluded nude beach. Despite the nude beach it is totally worth the short hike for the view of Prapratno Beach when looking back into the bay.

A day trip along the Dalmatia coast is an absolute must for anyone staying in Dubrovnik. It is an easy drive that you can do on your own schedule in a rental car. Ston is a great small town if you are looking for a change of pace from busy Dubrovnik and hiking the Great Wall of Croatia is much less hectic than the city walls of Dubrovnik. Of course there are plenty of amazing beaches in Croatia, but Prapratno has to be one of the most beautiful. Overall we really enjoyed Croatia and hope to be back soon!

Has anyone else had any amazing day trips from Dubrovnik, Croatia? 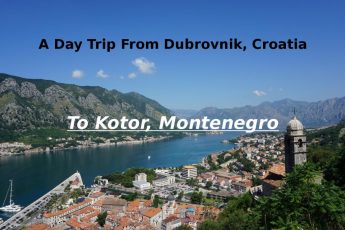 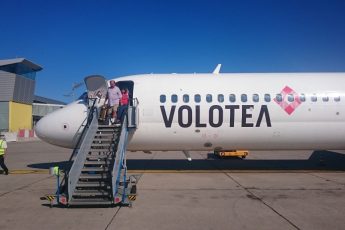 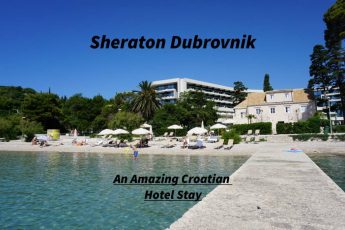 « Previous post
Our 2016 Travel Review! From Australia to Europe and Everything In Between
Next post »
Day Trip to Kotor, Montenegro from Dubrovnik