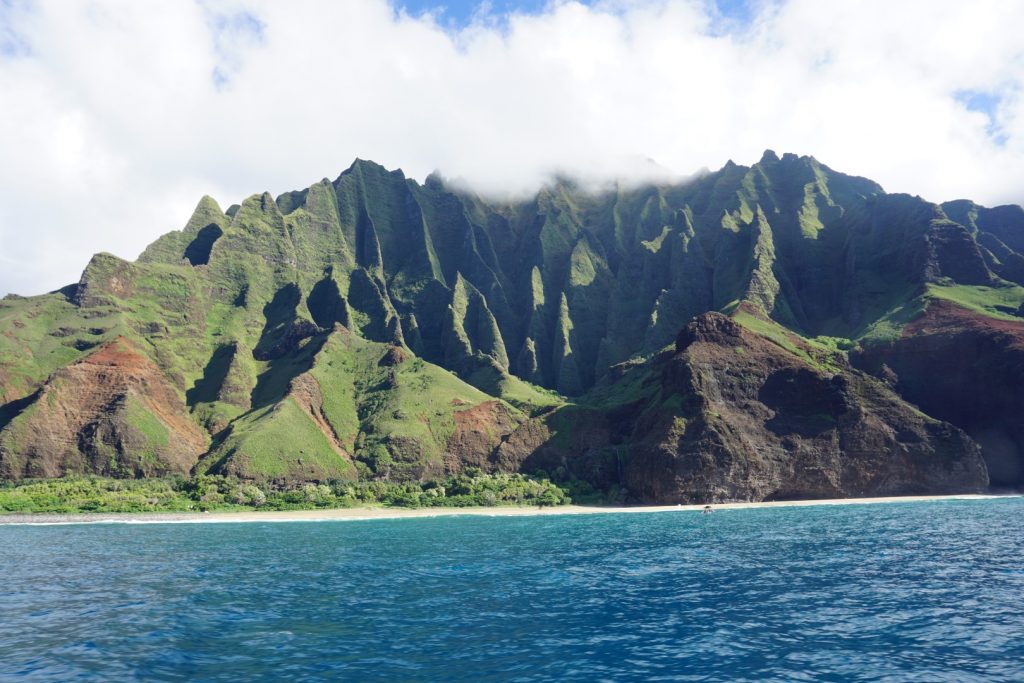 A Week in Kauai All on Miles and Points

Our first big trip for 2018 was off to Kauai! This was both Beth’s and I’s first time to anywhere in Hawaii and we had a great time. Now of course with us being frugal and into miles and points we were able to save a significant amount of cash by using miles and points for our flights, hotel, and even on the rental car. To summarize, these are all the options we used to get to Hawaii near free!

United Flights from Denver to Lihue

For the flights we lucked out that United announced a ton of new nonstop flights to Hawaii from Denver in June 2017. We happened to be on vacation in Puerto Rico (hopefully I can write that post too) and hadn’t even moved to Colorado yet but we were able to book XN award availability for spring break. This is a pretty hard award ticket to book and it was perfect times with a Saturday to Saturday flight at one of the peak times. It was a total of 90,000 United miles or 45,000 United miles each for round trip. 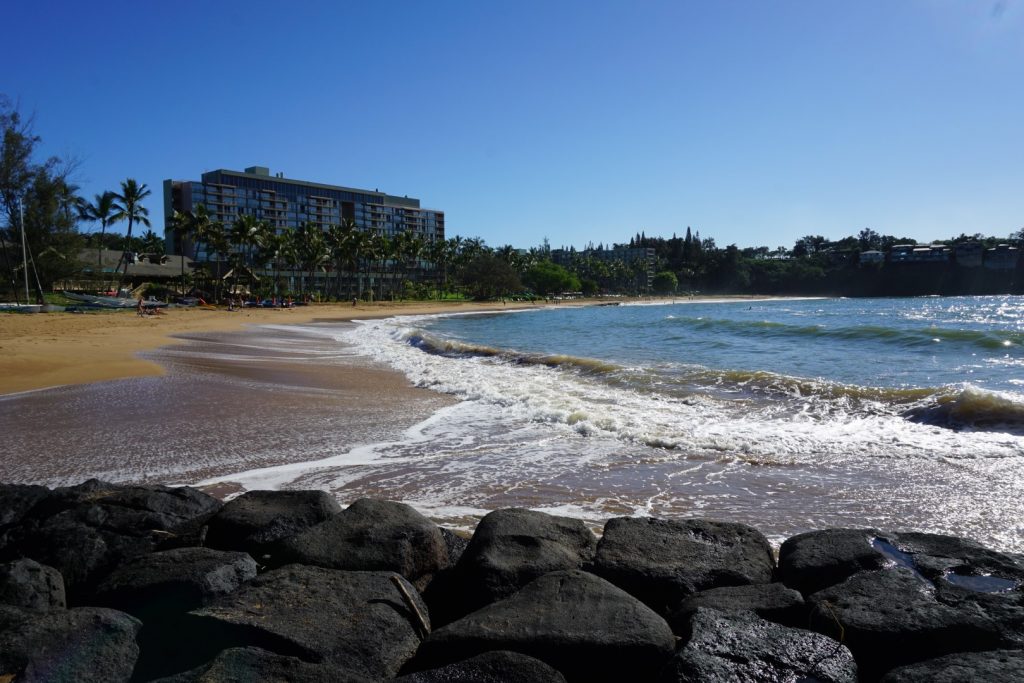 So in March 2017 I was able to snag a Marriott travel package before Southwest changed their policy for awarding a companion pass for this kind of transfer. We barely had enough Marriott points but thanks to the Starwood merger we were able to combine a lot of points to redeem 120,000 Southwest points and 7 night category package. Of course when redeeming a Marriott travel package, you get 7 free nights to use at one property. I originally redeemed the package for a category 5 package and had no real plan to use the nights. Well with the Hawaii trip lined up, I had a reason to use it now but no category 5 hotels on the islands. Since my work travel picked up, I earned plenty of Marriott points to upgrade the Marriott travel package to a category 8 package and found availability at the Marriott Kauai for the exact dates! A useful tip is if that the Marriott travel package’s free nights expire within a year but if you upgrade them it extends the expiration date exactly one year from the upgrade date.

One overlooked area of miles and points are rental car points. They can be extremely valuable for one-way rentals or for expensive locations like Hawaii. I had switched to National recently but had almost enough points for a free week at Hertz from past travel. Fortunately Hertz has a lot of good targeted promotions and I was able to take advantage. I was about 500 points short and lo and behold Hertz sent an email for 550 Hertz points for a rental of $35 or more. So I booked the cheapest rental I could near my house drove maybe 10 miles and returned it within 2 hours and got my 550 points. Yes, it was not entirely free and of course the points did not reduce the taxes and fees but it still saved a significant amount of money. Estimated between $300 – $500 of savings for that week.

Review of the Marriott Kauai 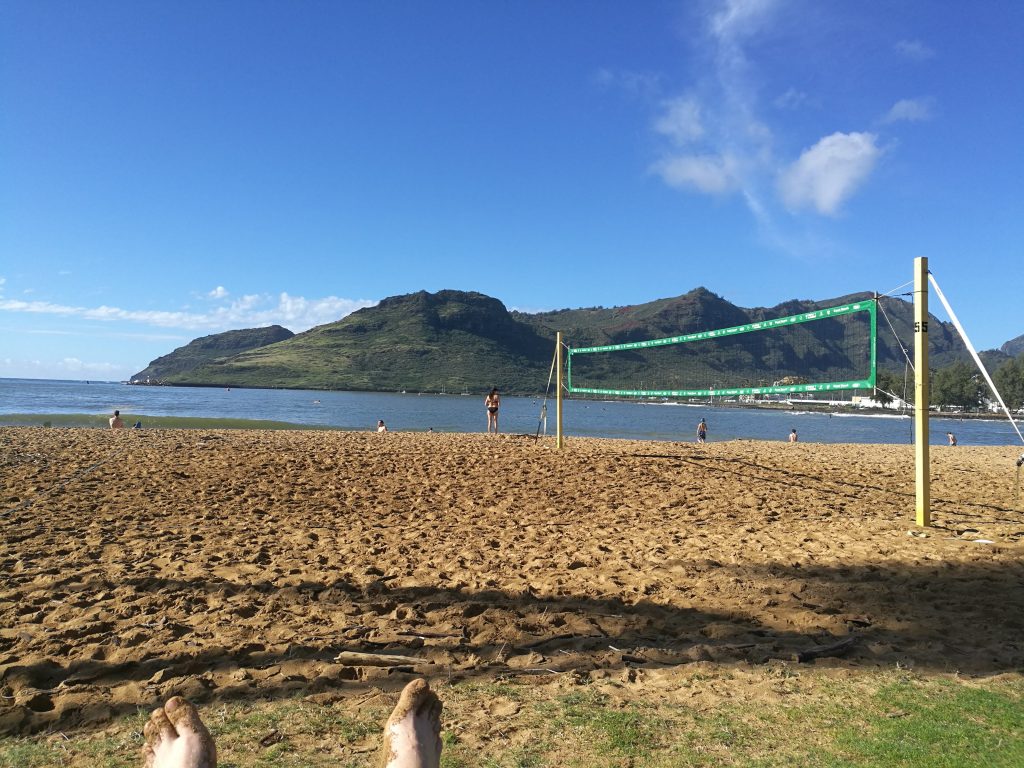 The Marriott Kauai sits just a few miles from the Lihue Airport and is centrally located for adventuring all over the island. It wasn’t more than an 1.5 hour to either side of the island. Despite being close to the airport, the planes were not obtrusive.

Honestly, the Marriott beat our expectations! The beach was much nicer than expected with a nice grassy area just above the sand where the hotel chairs are. The views from the hotel and beach are spectacular with the a mountainous point jutting out and creating a nice harbor. The center piece of the hotel is the insanely large pool with an island in the center. Surrounding the pool are four hot tubs and then a separate pool with a children’s water slide. 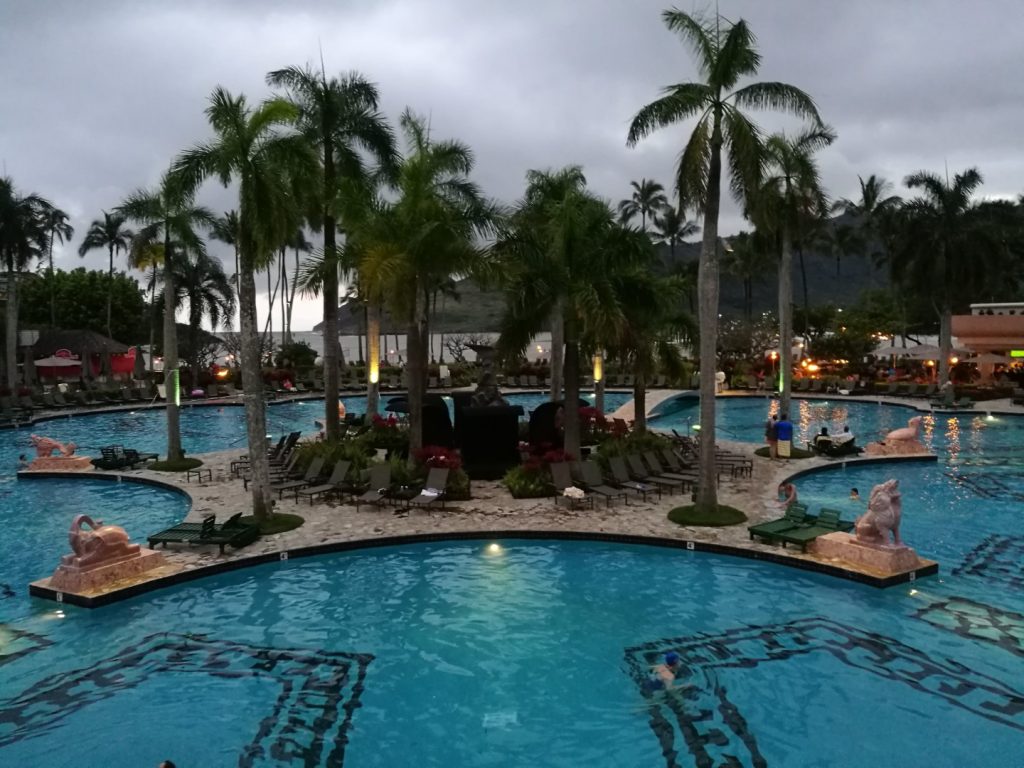 As a gold Marriott Rewards Member we booked into a pool view king room. The room was pretty standard with a pullout, mini-fridge, and a decent sized bathroom. The balcony had a decent view with a partial ocean view which suited us well. One thing I was surprised about was how convenient the Marriott was to other restaurants and shops. There is a really nice path along the beach that brings you to many restaurants. Surprisingly the nearby restaurants and even the hotel restaurant were reasonably priced for Hawaiian standards.

While we did get our fair share of relaxing at the pool and beach at the Marriott we also wanted to do so exploring and hiking. 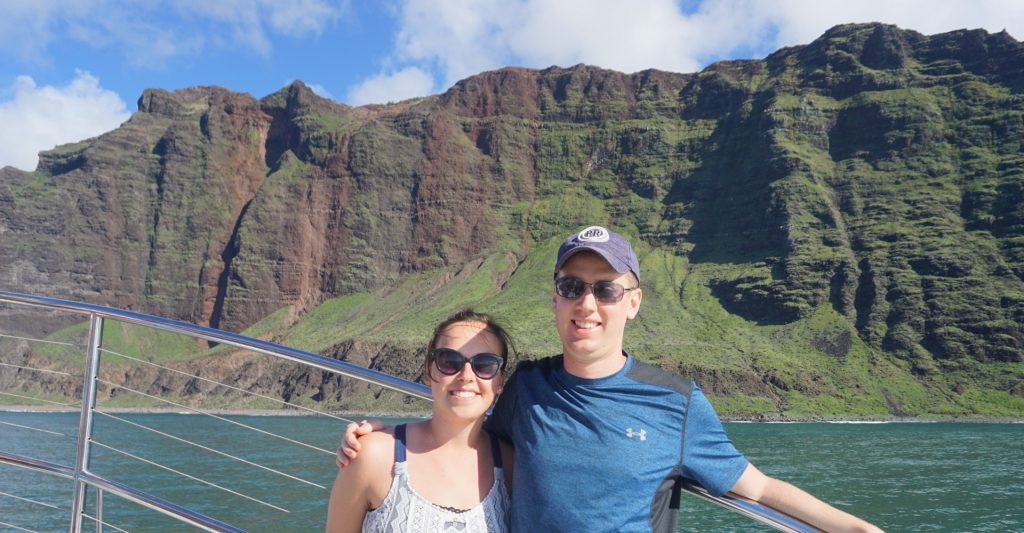 Our first adventure was a Captain Andy’s sunset cruise along the Nā Pali Coast which did not disappoint. The Nā Pali Coast is breathtaking and very inaccessible with it’s steep mountains and canyons. The only ways to truly see it is either by hiking, flying, or boating.

Along our cruise we were fortunate enough to see three whales and plenty of dolphins on our ride up the coast. That was our first time ever seeing whales! Of course the coastline was dramatic and totally worth the four hour boat road. The crew was great and we highly recommend taking Captain Andy’s! 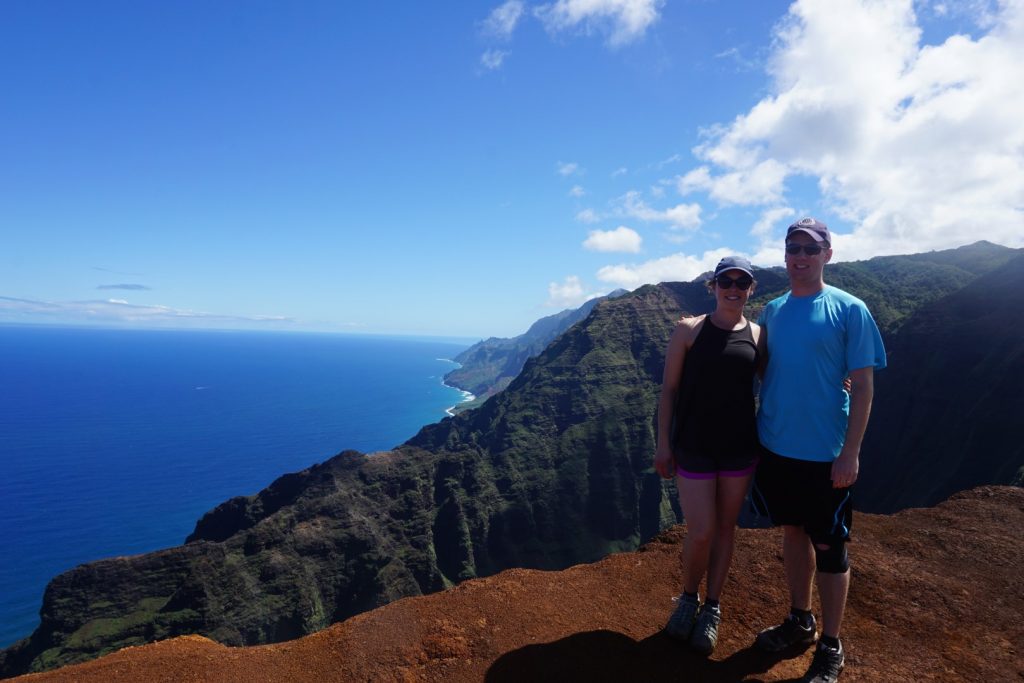 We lucked out with the weather as the weeks leading up to our trip it was raining constantly in Kauai. This meant we had a nice sunny day for a 6.6 mile hike on the Nualolo Trail but because of all the rain it was terribly muddy and slippery. We arrived early so it wasn’t too hot and there was maybe 10 total people on the whole trail.

The trail was about 2,000 vertical feet, which isn’t too bad compared to what we do in Colorado, but the hike was hard! The wetness made it extremely difficult, especially on the steeper sections. Despite the difficulty, the views were incredible. The only other way to see these views are through a helicopter tour. We were the second group to make it to the end of trail that day to the overlook and the other person left as we arrived so we had to ourselves (plus all the lazy helicopter people!). 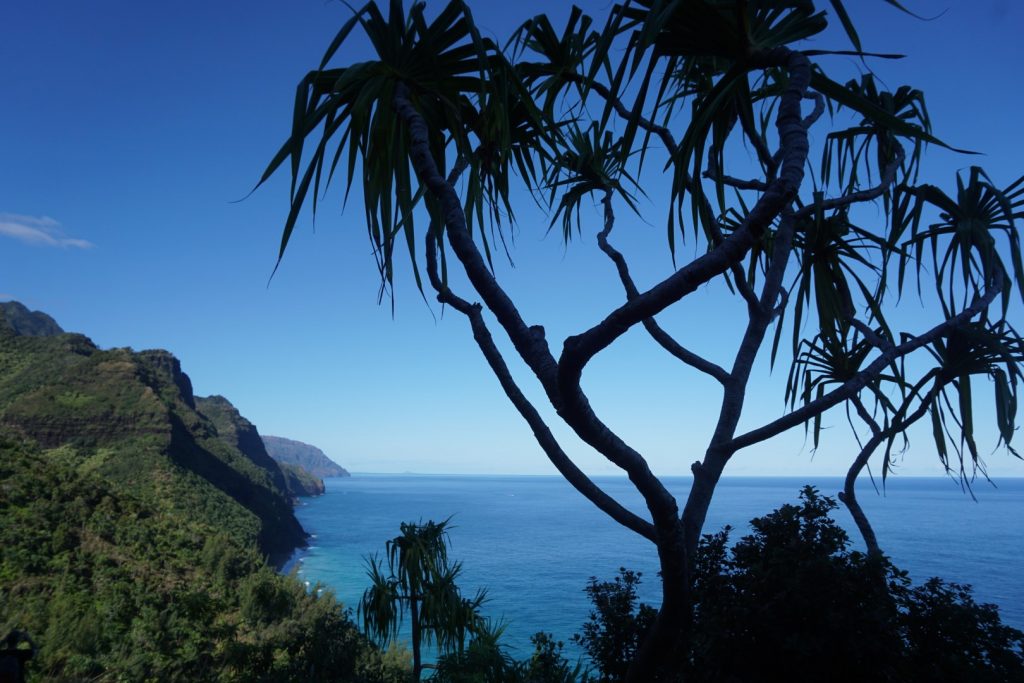 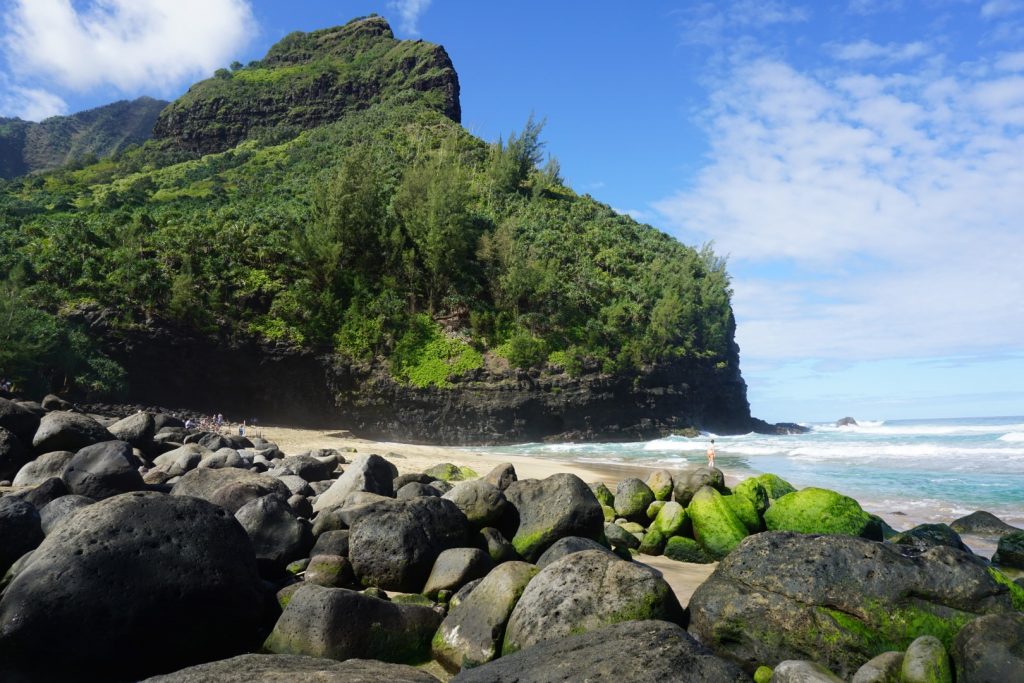 It was definitely busier but it was also significantly easier than the other hike we did. The views are great as well and the beach was a nice stopping point. As a side note parking was crazy, thankfully we got there early and didn’t have a problem getting a spot. However, after our hike there were no joke probably a hundred cars parked illegally all over the street. It was pretty ridiculous and we were blocked in but had plans to stay Ke’e Beach after hiking anyway. 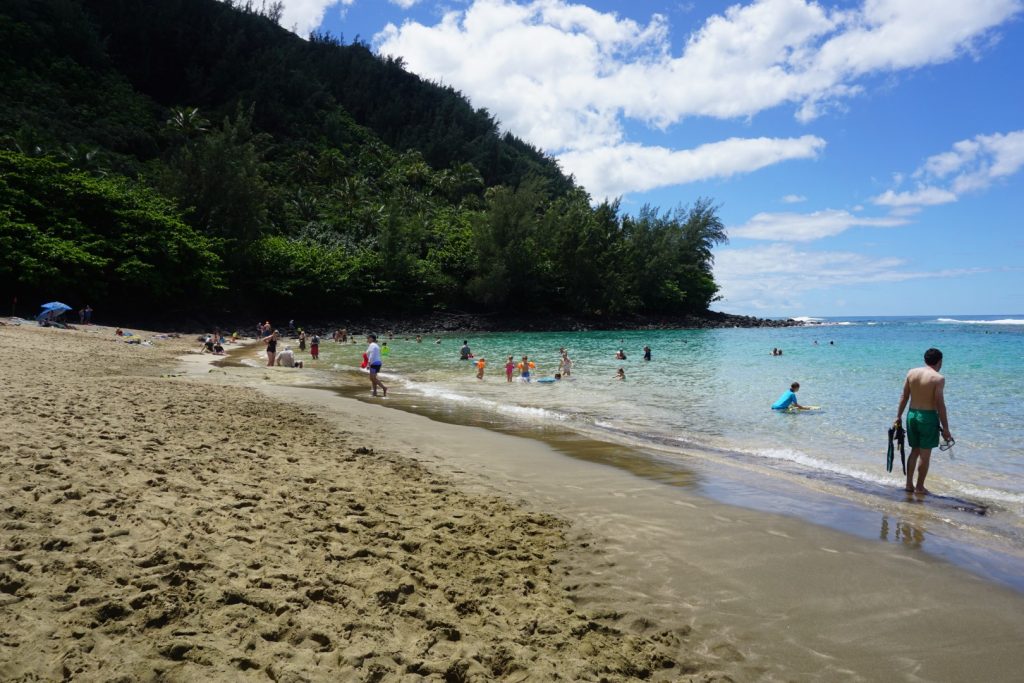 Ke’e Beach is at the start of the trail head and it is a beautiful beach and a good spot for snorkeling. Be wary though as there are rip tides on the north side of the island especially in the winter which is when we went.

We were not active the whole time and did enjoy a couple of beaches without hiking. We really enjoyed our hotel’s beach, Kalapaki, and spent a couple days enjoy that as I noted above. I did manage to get a surfer lesson in and had no problems getting up! It is one of the better beginner surfing beaches in Hawaii and I had a blast. 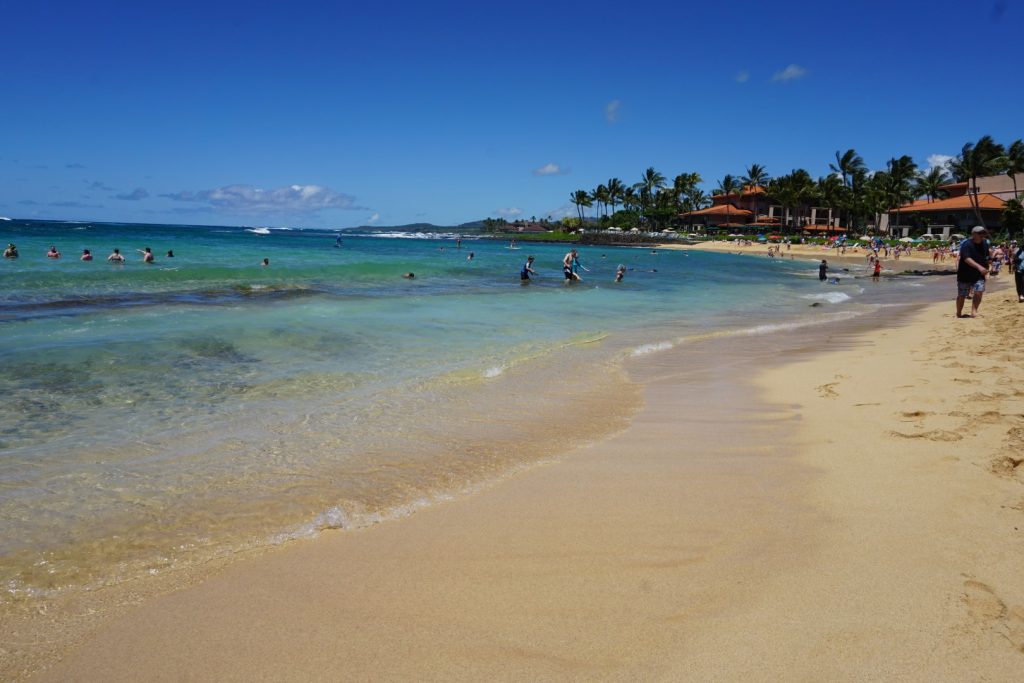 Another beach we enjoyed was Poipu Beach. It was just about 20 minutes south of the Marriott. It was another great snorkeling beach and was pretty busy too. The best part was that a monk seal and sea turtle both decided to take a break on the beach. It was pretty neat being able to be so close to them.

One other beach we checked out was Hanalei, which was great for trying to ride waves. Hanalei is a huge beach on the north side of the island. The water was pretty rough the day we went but still swimmable. The rip tide was rough, but once you got further out there was a nice sandbar where the waves crashed. We took a couple of tumbles in the waves, but we had a blast!

Most of our vacations are centered around hiking, exploring, or beaching, but we did manage to have some good eats too. Hawaii in general is significantly more expensive than the mainland, which we noticed when we went out to eat. Despite the higher prices we had one of our best meals at a food truck of all places. Fresh Bite Kaui, up in Hanalei, was so good we ate their twice. The quinoa bowls are absolutely delicious and so is their chipotle cheese fries. Make sure you get the fries as purple sweet potato.

It was another great trip and I honestly would recommend staying at the Marriott Kauai. The location is hard to beat with it being central and having direct access to a beautiful beach. The only downsides to the trip was that it was an expensive destination overall and that it is pretty far. With that being said, I would repeat our itinerary almost exactly if you have not been to Kauai. While I don’t envision us going back to Kauai anytime soon, I could see visiting another Hawaii island to explore new areas in the future. 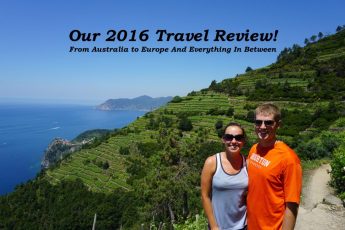 Our 2016 Travel Review! From Australia to Europe and Everything In Between 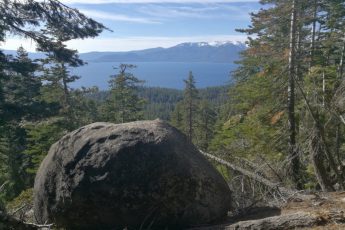 Lake Tahoe, a Work Trip Turned Into an Adventure

« Previous post
A Trip to Greece and More via Miles and Points
Next post »
Our 2017 Travel Review!