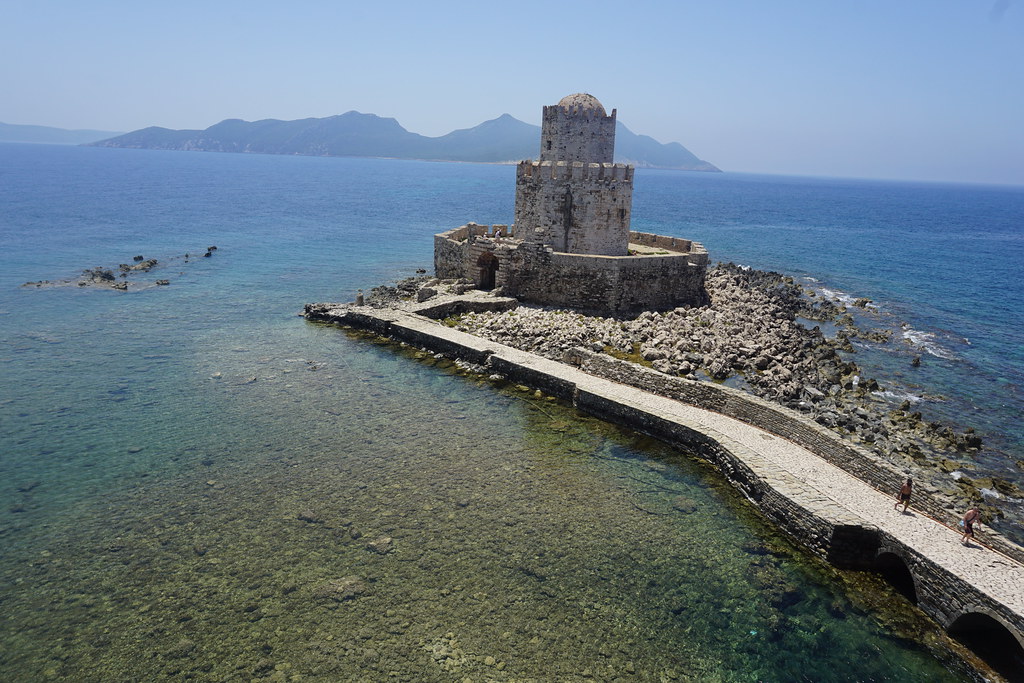 While staying in Peloponnese, Greece our plan was to try to adventure to many of the beautiful towns and beaches. From the Westin Costa Navarino we thought a perfect day trip would be to Methoni which is only 35 minutes away. Methoni is a small town on the southwestern most tip of mainland Greece and has an incredible castle. From our research there was also the possibility of taking a boat to the nearby Sapientza Isle. We could barely find any information online about this boat. The best guidance we could find was to show up at the docks at 10:00 AM.

Getting a Boat to Sapientza Isle

For our day trip to Methoni we got up early to leave us plenty of time to try and find the boat to Sapientza. The drive took us around the Gialova Bay, through the nearby town of Pylos, and then to Methoni. As with many Greek coastal towns the best and easiest parking is near the docks. We parked for free right in front of the main dock.

When we arrived we didn’t see any boats on the main dock. At a nearby restaurant we asked about the boat and they said that the dock was the correct place. Sure enough right around 10 AM we saw a small boat pull up. We walked out to the dock and saw a German couple doing the same thing as us. They joined us on the boat to Sapientza.

The name of the boat charter was Balkan Cruises. In our research we could find very limited information online about them but we can assure you they exist. Our captain didn’t speak much English but we were able to negotiate a ride to the island and back for 15 Euros each. We hopped on the boat and were dropped off at the uninhabited island with our new German friends and no way of contacting anyone… We told the boat captain to pick us up around 1 PM. The possibility of being stranded did occur to us. We prayed that the Euros we owned him would be enough of an incentive to pick us up…

As we pulled into the small but gorgeous beach we realized the island was deserted. Our thoughts wandered wondering if we would be left on this island with our new German friends and the local wildlife?

Once our feet hit the sand we took in the view of crystal clear water as the Balkan Cruise boat left. There isn’t much to the beach but having it basically to yourself is divine.

Sapientza Isle is a decent size and would take you all day to hike across it. One of the most interesting thing about the island is that it is one of the few places in the world where you can find the Kri Kri Goats.

We wanted to get a small hike before settling down by the beach in hopes of finding the Kri Kri. Our legs led us up the hill into the wilderness on a clearly marked path but it was obvious not many people travel on it. There were tons of spiders and their webs. We eventually reached a fork in the path and had not spotted a Kri Kri. As we headed back to the beach we found the Kri Kri hiding in the trees next to the shore!

Once settled back on the beach we enjoyed the unspoiled views of the water and the mainland. Eventually more people were dropped off by our boat captain and a couple of other boats parked in front of the beach. Despite the newcomers it was not busy at all. 1 PM came around and the Balkan Cruise captain came back and picked us up along with the German couple. We were not stranded on the island!

Once back in town we couldn’t pass up exploring the nearby Methoni Castle. The Methoni Castle was originally built by the Venetians in the 13th century. The famous tower structure sits in the sea and was built by the Ottomans in 1500s as an additional fortification which also served as a prison and torture chamber.

The castle is much bigger than just the fortification and used to be an entire town. Some of the ruins remain including a chapel. However, much of the town within the enclosed walls is covered in beautiful flowers.

No visit would be complete without walking into the old Ottoman fortification for the beautiful views of the sea. We really enjoyed the castle and is definitely worth a visit.

Our day trip to Methoni was nearly perfect! We were able to get a boat to drop us off on an uninhabited island by ourselves and were not left stranded. Wandering through the Methoni castle was worth it despite the Greek summer heat. After finishing our adventures in Methoni we did manage to sit down at a great Greek restaurant before driving back to the Westin Costa Navarino. The Peloponnese has many great sites like Voidokilia beach, Polylimnio waterfalls, and of course Methoni! Methoni and Sapientza Isle should be added to any Greece trip. 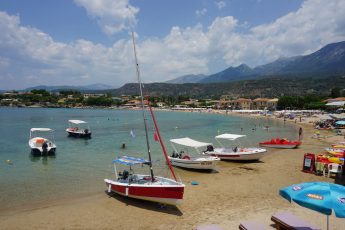 A Trip to Greece and More via Miles and Points 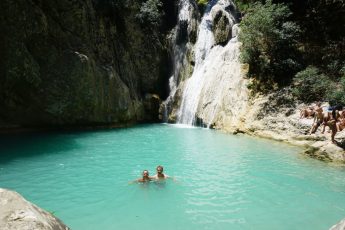 The Polylimnio Waterfalls in Peloponnese Greece

« Previous post
Ancient Messene, the Most Impressive Greek Ruins No One Knows About
Next post »
Voidokilia Beach, A Greek Postcard Worthy of a Hike